Days of Our Lives Spoilers: Lani Can’t Fight Her Feelings For Eli – Jealousy Over Sheila Brings Pair Together

BY hellodrdavis on November 16, 2018 | Comments: one comment
Related : Days of Our Lives, Soap Opera, Spoiler, Television 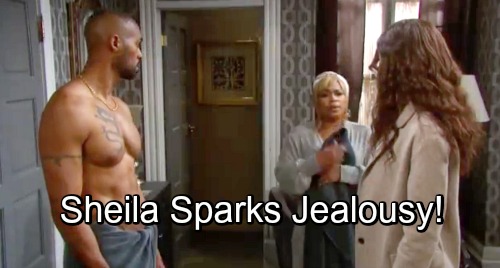 Days of Our Lives (DOOL) spoilers tease that Lani (Sal Stowers) will find herself getting pretty frustrated. She told Eli (Lamon Archey) that she didn’t want to forge a future with him, and he had no choice but to accept it and go on with his life. It just so happened that moving on with his life including making room in it for his old friend Sheila (Tionne Watkins).

Sheila and Lani didn’t exactly get started on the right foot, with Sheila giving Lani a piece of her mind about breaking Eli’s heart. And of course, Sheila and Lani’s dad Abe (James Reynolds) aren’t on the best terms, either.

It was clear that Lani wasn’t too happy when she found out that Sheila was staying at Eli’s place, and feelings of jealousy started creeping in. Of course, Lani wouldn’t admit to herself that she was feeling jealous but that’s clearly what was going on.

According to the new Days 2018-2019 video promo, Lani will start to feel jealous times ten when she drops in on Eli and finds Eli shirtless with Sheila there. She’ll lash out at Eli for parading around in his underwear, and Eli will be stunned by the outburst.

But soon Eli will realize why Lani’s so upset, and he’ll put on a huge grin, which will irritate Lani even more. The promo shows Eli later drawing Lani in for a big smooch, so it looks like these two will eventually end up coming together.

They may have a couple issues to work through still, related to the death of their son earlier this year, but “Elani” looks to be a go for 2019. Are you glad to see these two finally getting together? Stay tuned to DOOL and don’t forget to check CDL often for the latest Days of Our Lives spoilers, updates, and news.