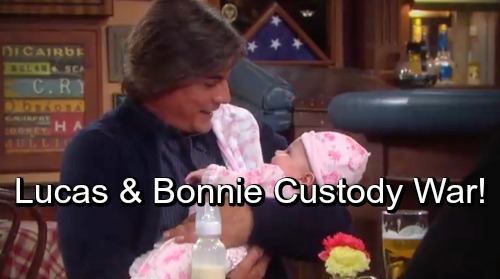 Days of Our Lives (DOOL) spoilers tease that Lucas (Bryan Dattilo) will start to bond with his little girl. He was reluctant to believe Bonnie’s (Judi Evans) claims at first, but he had to admit he felt a connection with the kid. After Kayla (Mary Beth Evans) offered DNA proof, Lucas was sold. He accepted that Bonnie had given birth to his child, so he’s ready to embrace a life with his daughter.

DOOL fans can expect Lucas to adjust quickly. He adores his other children, so there’s no reason he won’t adore this one, too. Baby Bonnie will get a name change if Lucas gets his way. He doesn’t want any reminders of her manipulative mom to haunt her. Lucas would rather take charge and completely push Bonnie out of the picture.

Days of Our Lives spoilers say Lucas will take steps to make that happen soon. During the week of October 15-19, Bonnie will get quite a shock. Lucas will have a big announcement to make and it won’t be what Bonnie wants to hear. He’ll reveal that he intends to seek sole custody of the baby. Lucas will feel like he’s the kid’s only shot at a somewhat normal and happy life.

Naturally, Bonnie will be prepared to fight. She’s been exploiting “Baby Bon Bon” to get what she wants, so she’ll want to keep that advantage. All this madness should really drive Mimi (Farah Fath) up the wall. Days viewers will definitely see some mother-daughter clashing over the next few weeks.

Mimi won’t approve of Bonnie’s grand plan. She’ll fear that the next phase will bring serious trouble. Days of Our Lives spoilers say there’s a lie at the core of Bonnie’s story, which is the reason for Mimi’s comeback. Mimi is actually this baby’s mom, so it should be interesting to hear all the details.

In the meantime, it sounds like DOOL fans should gear up for another custody battle. Brady (Eric Martsolf) and Theresa (Jen Lilley) were behind Salem’s last major war. That brought some hot drama, so maybe Lucas and Bonnie’s showdown will as well – if it gets that far! Mimi may put a stop to this mess soon enough.

Days has some fantastic moments in store, so stay tuned. We’ll give you updates as other news comes in. Stick with the NBC soap and don’t forget to check CDL often for the latest Days of Our Lives spoilers, updates and news.