BY hellodrdavis on August 19, 2018 | Comments: one comment
Related : Days of Our Lives, Soap Opera, Spoiler, Television 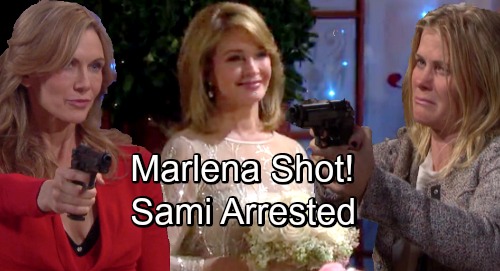 Days of Our Lives (DOOL) spoilers tease that Marlena (Deidre Hall) and John’s (Drake Hogestyn) wedding will bring both chaos and tragedy. Marlena has been preoccupied with planning the “perfect” wedding, but it looks like her wedding day will be anything but perfect. Of course, when you have your wedding in the town square, virtually anyone could crash your ceremony.

Marlena and John are in for a major wedding crash, when Sami (Alison Sweeney) appears mid-ceremony, looking disheveled and sounding downright intoxicated! Her family will try to get a grip on her as he behaves erratically, but she’ll persist in causing a scene. Worst of all, she’ll pull out a gun!

To add to the chaos, Kristen (Stacy Haiduk) will make an appearance, also brandishing a gun. Of course, whether Kristen is actually there or is Sami’s hallucination remains to be seen. But knowing Kristen, she’d do anything to ruin John and Marlena’s big day, so it may be her in the flesh!

At any rate, the scene will be one of sheer chaos, and in the midst of it all, a terrible tragedy will occur. Days spoilers say that John will be horrified as he realizes that Marlena has been shot and he might lose her on their wedding day. Kayla (Mary Beth Evans) will likely attend to Marlena’s injuries at the scene, and she’ll be rushed to the hospital for emergency surgery.

But who’s the shooter? Days spoilers say that Rafe (Galen Gering) will arrest Sami, so it looks like Sami will be the guilty party. But why would Sami shoot her own mother? She could be drugged, and if Kristen is involved, then that’s a sure possibility. Kristen may have kidnapped and drugged Sami to enact some sort of revenge plot against Marlena and John, and Sami escaped!

Perhaps Sami, in a drugged state, will actually think she’s saving Marlena from Kristen, but will mistakenly shoot Marlena. Regardless of Sami’s motivation and mental state, it’s going to be a wild scene, and Sami’s going to be in a world of legal trouble. Depending on her condition, she may not even know what she’s done.

What do you think is really behind Sami’s actions? Stay tuned to DOOL and don’t forget to check CDL often for the latest Days of Our Lives spoilers, updates, and news.