Days of Our Lives Spoilers: Marlena Vanishes After Gabby’s Vicious Attack – Panic Sets in for John 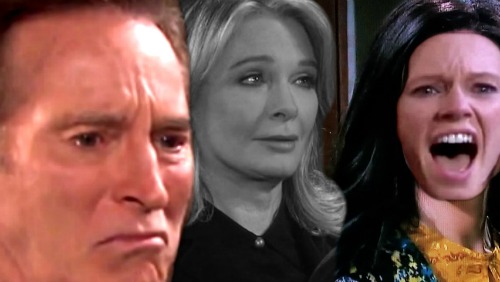 Days of Our Lives (DOOL) spoilers tease that Marlena (Deidre Hall) could find herself in grave danger. The trouble will start when Abigail (Marci Miller) reaches out to Marlena for help. She’ll worry that her symptoms are the result of a serious mental issue and she’s exactly right.

“Dr. Laura” will show up during their meeting, so Marlena may put the puzzle pieces together. She might figure out that Abigail has dissociative identity disorder and needs treatment. “Dr. Laura” will undoubtedly object to that, but her response should be tame compared to “Gabby’s.”

DOOL fans know “Gabby” can lash out when she feels threatened or doesn’t get what she wants. Just look at what happened during her confrontation with Vivian (Louise Sorel). “Gabby” nearly assaulted Viv with a fireplace poker!

Of course, there’s also Andre’s (Thaao Penghlis) murder to consider. “Dr. Laura” claims Abigail did it and later developed “Gabby” as a coping mechanism. It doesn’t make sense that Abigail would murder her best friend, but maybe “Dr. Laura’s” twisting the facts or knows there’s more to this Days story.

Regardless, Abigail and her alters are dangerous. They all live within the same body, so there’s always the potential for peril. Days of Our Lives spoilers say Marlena will indeed land in a tight spot soon. During the week of April 9-13, “Gabby” will launch a vicious attack.

It sounds like “Gabby” will be desperate to avoid Abigail’s treatment. She realizes she’ll disappear if Abigail gets the assistance she needs. “Gabby” wants to do her own thing and live a brand-new life. She’s aware that she’s not exactly real, but Stefan’s (Tyler Christopher) making her believe she could be.

If “Gabby” wants to preserve this new path and keep her romance with Stefan going, she’ll have to do something drastic. “Gabby’s” violent behavior will catch Marlena off guard, so that could put “Doc” at a disadvantage. Perhaps “Gabby” will knock Marlena out and try to come up with the rest of the plan.

Later, Days of Our Lives spoilers state that Marlena will vanish! John (Drake Hogestyn) should panic when he realizes she’s missing. He’ll be desperate to track Marlena down, but where will she be? “Gabby” might lock Marlena in the DiMera dungeon or anywhere else she can think of.

Will Stefan help “Gabby” handle the madness? Is the jig almost up for these two? We’ll give you updates as other Days news comes in. Stick with DOOL and don’t forget to check CDL often for the latest Days of Our Lives spoilers, updates and news.