Days of Our Lives Spoilers: Marlena’s In A Coma – Living Will Causes Life and Death Battle Between John and Belle 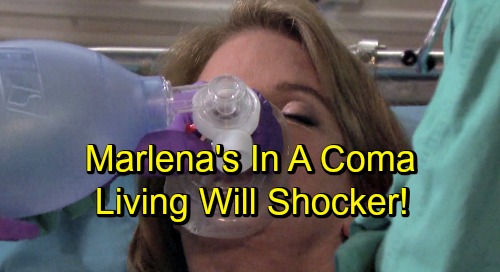 Days of Our Lives (DOOL) spoilers tease that Marlena’s (Deidre Hall) condition is going to be tenuous after her surgery. That bullet lodged close to her heart and she suffered some very serious injuries. The family took turns wishing Marlena well before her surgery, and they didn’t want to think about it, but they knew that it might be the last time they spoke to her.

It looks like Marlena is going to suffer some serious post-surgery complications. John (Drake Hogestyn) will anxiously wait for her to wake up, but whether she does regain consciousness immediately after her surgery remains to be seen. Days spoilers say that John will find Marlena in distress and Valerie (Vanessa Williams) will step in to save her life, so it sounds like things will be touch and go.

Unfortunately, there’s indication that Marlena’s condition will gradually worsen. Days spoilers say that Belle (Martha Madison) will discover Marlena’s medical directive (i.e., living will) among her papers. The living will is going to spell out Marlena’s wishes for medical treatment should she become incapacitated and unable to make decisions for herself.

Marlena’s condition will deteriorate to the point at which the living will comes into play, and that’s going to cause some major family conflict. It seems that John’s wishes for Marlena’s treatment will be at odds with what Marlena spelled out in her living will.

It could be the situation that Marlena’s living will directs her doctors to withhold life-saving measures if her condition deteriorates to a certain point. If that’s the case, John will probably strenuously object, arguing that Marlena could recover and should be given every medical opportunity to survive. Look for Belle and John to disagree about what should be done medically for Marlena.

Of course, Marlena’s other family members will want to weigh in as well. We could be looking at a full-scale family battle over how to medically handle a comatose and unresponsive Marlena. Of course, there’s no indication that Deidre Hall is leaving DOOL, so Marlena should eventually recover. But it looks like Marlena’s outcome may look bleak to her family, at least for a while.

It certainly looks like we’re in for some gripping drama over Marlena’s condition! Stay tuned to DOOL and don’t forget to check CDL often for the latest Days of Our Lives spoilers, updates, and news.