BY Heather Hughes on May 8, 2018 | Comments: one comment
Related : Days of Our Lives, Soap Opera, Spoiler, Television 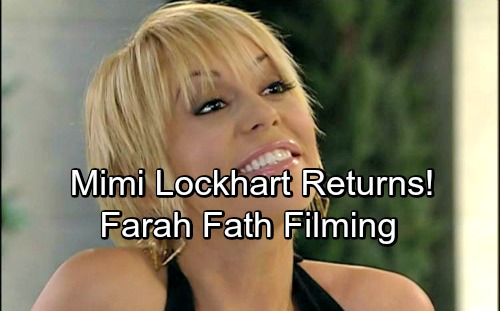 Days of Our Lives (DOOL) spoilers tease that another familiar face will pop up in Salem. Farah Fath played Mimi Lockhart from 1999-2007, so it’s certainly time for her comeback. Fath is currently on set filming new scenes, which means Mimi will return for more drama.

Since DOOL tapes a few months in advance, it’ll be a while before Mimi hits the screen. However, Days of Our Lives spoilers say she’ll be worth the wait. It should be nice to see Mimi again and possibly catch up with her mother, too.

Of course, we’re talking about Bonnie Lockhart (Judi Evans). During Bonnie’s last stint, she stirred up some doppelganger trouble for Adrienne (Judi Evans) and ultimately went on the run. There’s a good chance Evans will reprise her role as Bonnie during Mimi’s next stint. Days can’t pass up the chance to have these two share scenes!

Ron Carlivati, DOOL’s head writer, also wrote for Fath when she was on One Life to Live. She played Gigi Morasco after her Days departure, so Carlivati sent out a funny tweet to make that connection. He quoted Soap Opera Digest’s return announcement and added, “Wait, I thought her name was Gigi… #days #oltl #mimi #gigi.”

Fath also sent out some tweets as the comeback news started to spread. She wanted her fans to know she appreciates all their support. Fath said, “Wow! Getting so many nice messages. Thank you all for being excited, I’m excited too! It’s been real fun so far. So good to see everyone and play.”

As with most return stints, there were questions about how long it’s going to last. Days of Our Lives viewers immediately reached out to Fath asking for the scoop. They wondered if she’ll be sticking around or if this is just a quick visit.

Unfortunately, Mimi won’t stay in Salem for long. Fath revealed that she’ll only be back for a handful of episodes, but that’s better than nothing! It’s always great when Days brings have classic characters and offers a blast from the past.

Are you looking forward to Mimi’s return? We’ll give you updates as other DOOL details emerge. Stay tuned to the NBC soap and don’t forget to check CDL often for the latest Days of Our Lives spoilers, updates and news.