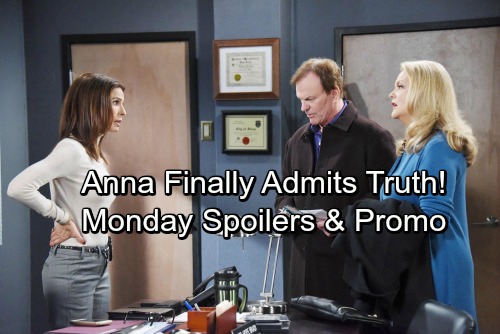 Days of Our Lives (DOOL) spoilers for Monday, February 5, tease that Anna (Leann Hunley) will decide to come clean. A fight broke out at the police station due to Hattie’s (Deidre Hall) antics, but Hope (Kristian Alfonso) will settle everyone down. She’ll convince Anna to tell the truth about the night Andre (Thaao Penghlis) died.

Anna will think back to the hours before Andre’s brutal murder. She’ll explain what brought her to DiMera Enterprises and how her meeting with Andre went down. Anna should share how she lost track of her beloved Tony’s (Thaao Penghlis) ashes. She’ll insist she didn’t use his urn to take Andre out.

Days of Our Lives spoilers state that Anna’s confession will come with a few surprises. She’ll realize all of this seems suspicious, but she’ll try to convince the cops that she’s innocent. Fortunately, it looks like Hope will believe Anna’s side of the story. She’ll send Hattie back to Statesville and push Rafe (Galen Gering) to follow up on the new clues.

One of those clues could point straight to Gabi (Camila Banus). Days of Our Lives spoilers say Eli (Lamon Archey) will get updates on all the new info. He’ll be the one to grill Gabi about her actions. Eli won’t want to believe that Gabi committed the crime, but the evidence will start piling up.

DOOL fans can expect Gabi to fight the charges coming later this week, February 5-9. Eli also has some baby drama looming thanks to Lani (Sal Stowers). The same goes for JJ (Casey Moss), but he’ll believe everything’s fine and dandy for now. JJ will continue his “Lani’s having my baby” tour in Monday’s episode.

Days spoilers reveal that Julie (Susan Seaforth Hayes) will be next on the list. JJ will gush over the bun in the oven and what it means for his future. Julie should be thrilled for him, but heartbreak will hit down the road. Lani’s lying and that means JJ’s dreams will ultimately be shattered.

It sounds like Days viewers will see some excitement. We’ll keep you posted as other DOOL news comes in. Stay tuned to the NBC soap and don’t forget to check CDL often for the latest Days of Our Lives spoilers, updates and news.