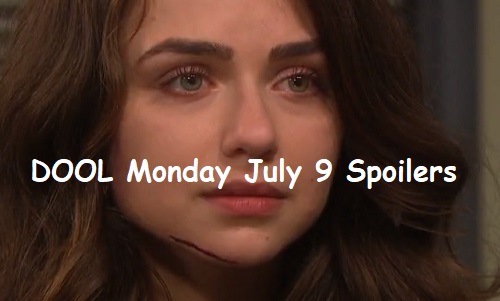 Days of Our Lives (DOOL) spoilers for Monday, July 9, tease that Brady (Eric Martsolf) will finish his confession. He may face a brief interruption from Eric (Greg Vaughan), but he’ll eventually have a chance to explain everything to Eve (Kassie DePaiva). Brady will admit that he found out Nicole (Arianne Zucker) killed Deimos (Vincent Irizarry) and used the info against her.

Eve will be surprised by the details of Brady’s scheme, but she won’t judge him for it. DOOL fans know Eve’s made her fair share of petty moves. She’ll understand that Brady was in pain and wanted to make Nicole suffer as well. However, Eve will think it’s time to come clean and pass the blame on. She won’t want Brady to lose custody because of Nicole’s actions.

Elsewhere, Will (Chandler Massey) and Sonny (Freddie Smith) will make a stunning discovery. Days of Our Lives spoilers say Leo’s (Greg Rikaart) car will vanish! They’ll head back to the area they dumped it in and get a big surprise. Sonny and Will stuffed Leo’s body in the trunk, but they’ll probably worry he wasn’t as dead as they thought.

Of course, Leo certainly seemed like a goner. Most Days buzz hints that someone else may have moved the evidence, but who could it be? That’s what Will and Sonny will have to find out! In the meantime, Ciara (Victoria Konefal) will fail to escape from the cabin. She won’t get very far on that broken leg.

After Ciara falls to the floor, Days spoilers say the smoke will become too much for her. Ciara will lose consciousness, so the situation will definitely be dire. Over with Hope (Kristian Alfonso) and Rafe (Galen Gering), they’ll finally head to Ciara’s location. She turned her phone on briefly, so that’ll give them what they need to track her down.

Days of Our Lives spoilers say they’ll race to the cabin and hope they’re not too late to save Ciara. Once Rafe sees that the cabin’s on fire, he’ll rush in and pull Ciara from the flames. DOOL viewers won’t want to miss this exciting episode! We’ll give you updates as other news comes in. Stick with the NBC soap and don’t forget to check CDL often for the latest Days of Our Lives spoilers, updates and news.