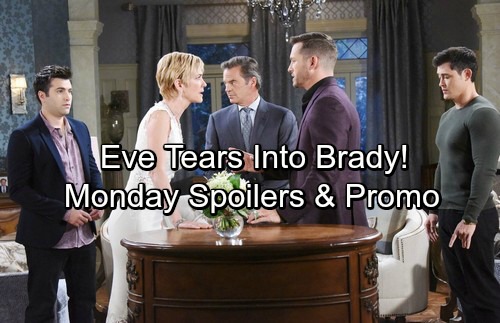 Days of Our Lives (DOOL) spoilers for Monday, March 12, tease that Brady (Eric Martsolf) will get an earful.  During their wedding vows, Eve (Kassie DePaiva) dropped quite a bomb.  She suggested she wouldn’t marry him if he were the last man on earth!

That means Eve found out about Brady’s plot and decided to play him, too. Of course, it appears this discovery may have been recent. Eve seemed to share some genuinely warm moments with Brady throughout their time together. They really bonded over Tate and everything that happened with Theresa (Jen Lilley). 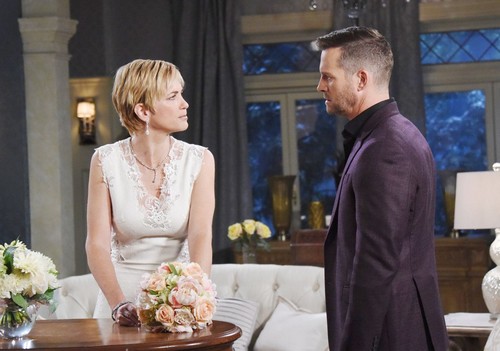 However, Eve won’t be feeling the love on Monday! Days of Our Lives spoilers say she’ll rip into Brady and insist that he’s going to pay for this. Eve will be appalled that Brady was willing to toy with her emotions like that. She’ll think he’s a despicable human being who deserves to go down.

After this wedding disaster, Paul (Christopher Sean) will have a lot on his mind. His feelings for Will (Chandler Massey) are growing, but it’s a tricky situation. Despite Sonny’s (Freddie Smith) attitude, Paul doesn’t want to hurt him. 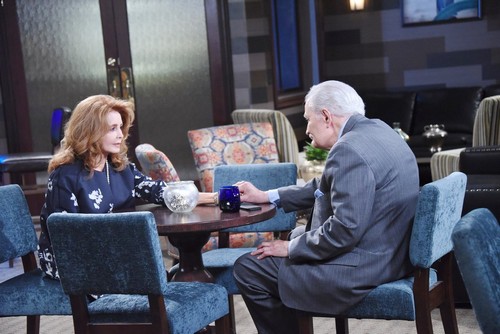 Nevertheless, the heart wants what it wants. Days spoilers state that Will and Paul will lock lips in Monday’s DOOL episode. It looks like the kiss will be completely mutual, so Sonny will have to deal with their budding romance. He’ll spot the smooch, which means we can expect an angry outburst.

Elsewhere, Maggie (Suzanne Rogers) and Victor (John Aniston) will focus on repairing their marriage. Since the Eve scheme is over, there’s no reason for them to stay apart. Days spoilers say it’ll take some work, but these two should get their relationship on solid ground eventually. 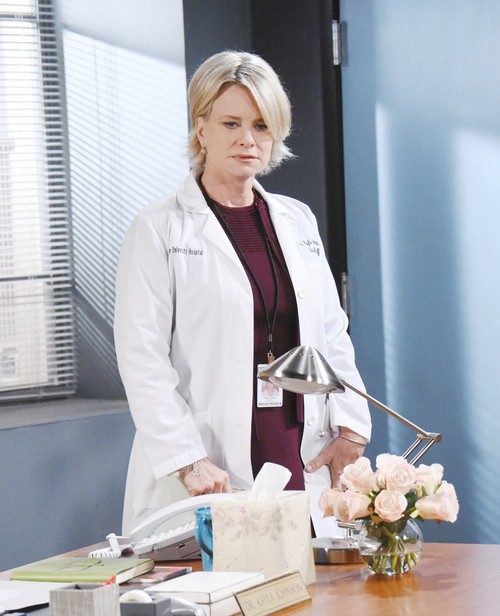 Other Days of Our Lives spoilers reveal that Steve’s (Stephen Nichols) vision will get worse. As he struggles, Kayla (Mary Beth Evans) will step up to make Steve feel a bit better. She can’t fix this, but she can at least let Steve know she’s there for him.

It sounds like a big episode’s coming up. We’ll give you updates as other DOOL news emerges. Stick with the NBC soap and don’t forget to check CDL often for the latest Days of Our Lives spoilers, updates and news.