Days of Our Lives Spoilers Next 2 Weeks: Ben Hallucinates Off His Meds, Ciara Freaks – Clyde Gets Grilled – Brady Haunted by Past 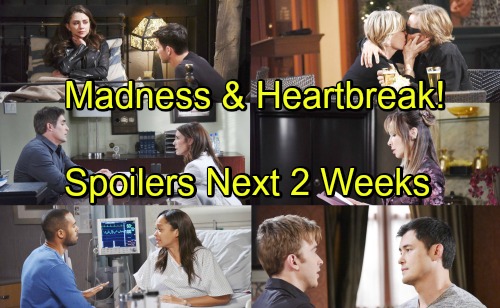 Days of Our Lives (DOOL) spoilers for the next two weeks tease that the drama’s about to heat up. During the week of June 25-29, Hope (Kristian Alfonso) will continue to fret about Ciara (Victoria Konefal). She knows Ciara’s staying with a man, but that’s all she has to go on.

After finding a few more clues, Hope will suddenly determine that Ciara may be with Ben (Robert Scott Wilson). Naturally, Days spoilers say she’ll completely freak! Hope will share her suspicions with Rafe (Galen Gering) as they work on a plan to bring Ciara home.

Over with Kayla (Mary Beth Evans), she’ll give Stefan (Tyler Christopher) some serious dirt. He’ll decide it’s good enough to get Steve (Stephen Nichols) his bionic eye. Of course, Kayla will have to fib a little when she spreads the news. Steve wouldn’t be on board if he knew Stefan was involved, so Kayla will keep that part a secret.

Speaking of secrets, Will’s (Chandler Massey) going to come clean about his. Days of Our Lives spoilers say Paul (Christopher Sean) will be surprised by Will’s confession. He’ll worry when he hears about Will’s memory of Sonny (Freddie Smith), but he’ll agree to inject him with another serum shot anyway.

The week of July 2-6 will bring some shockers at Ben and Ciara’s hideaway. For whatever reason, Ben will stop taking his medication. Perhaps he’ll run out of pills and decide he doesn’t want to leave Ciara to get more. Unfortunately, that’ll be a huge mistake. Days of Our Lives spoilers say Ben will begin to hallucinate. He’ll start coming unhinged and Ciara won’t know what do to.

Back with Hope and Rafe, they’ll reach out to Clyde (James Read) for help. Maybe they’ll ask if Ben ever mentioned a hiding spot. Hope will be desperate for any little nugget that could point in Ciara’s direction. Over with Leo (Greg Rikaart), he’ll get into an argument with Will. It won’t be long until their confrontation turns into a full-on brawl!

At the custody hearing, Theresa (Jen Lilley) and Brady (Eric Martsolf) will hold nothing back. You can bet Theresa’s name will be dragged through the mud, but she’ll have some secret weapons to help her out. We should note that Brady’s past isn’t sneaky clean either. In fact, something from not too long ago will trip him up.

DOOL spoilers say Brady will be linked to Deimos’ (Vincent Irizarry) murder. He once tried to set Eve (Kassie DePaiva) up with the amulet, so that may become a factor in all this. Brady probably won’t face charges, but he could certainly lose custody of Tate (Colin and Kyle Schroeder).

It sounds like some stunning moments are ahead. We’ll give you updates as other Days details emerge. Stick with DOOL and don’t forget to check CDL often for the latest Days of Our Lives spoilers, updates and news.