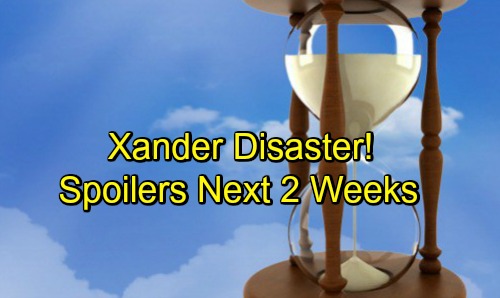 Days of Our Lives (DOOL) spoilers tease that the next two weeks will bring some ups and downs for many Salemites. During the week of October 1-5, Sami (Alison Sweeney) will make a startling discovery. She’ll realize Marlena (Deidre Hall) isn’t really Marlena, so she’ll lash out at Hattie (Deidre Hall) and demand some answers.

Soon after, DOOL spoilers say John (Drake Hogestyn), Roman (Josh Taylor) and Kayla (Mary Beth Evans) will let Sami in on their big secret. Before Sami can truly process everything, she’ll be hauled back to the police station. Eli (Lamon Archey) will insist that Sami violated the terms of her release, so she’ll have to be locked up again.

Fortunately, Marlena will manage to clear Sami’s name. She’ll insist that a second shooter was hiding in the bushes at the wedding. Marlena will believe this mysterious person fired the shot, so some ballistics tests will be ordered. Days spoilers say Sami will finally get off the hook, so she can concentrate on reuniting with EJ (James Scott).

Ben (Robert Scott Wilson) will also score his freedom thanks to the planted evidence. Hope (Kristian Alfonso) will face more accusations, but she’ll continue to deny any wrongdoing. Meanwhile, Ben will cause some issues for Tripp (Lucas Adams) and Ciara (Victoria Konefal) at the loft. This love triangle is only going to get hotter from here!

Over with Mimi (Farah Fath), she’ll return to town and push Bonnie (Judi Evans) to come clean. Mimi just won’t believe her mother’s baby story. The week of October 8-12 will deliver another round of shockers. Brady (Eric Martsolf) will grow closer to Kristen (Stacy Haiduk), but he’ll have a goal in mind. He’ll hope to learn some secrets that Kristen might be hiding, so she’d better watch out.

Of course, Brady needs to be careful as well. Days of Our Lives spoilers say he’ll be playing a dangerous game! Over with Eric (Greg Vaughan), his reunion with Nicole (Arianne Zucker) will lead them to the bedroom. While they make love, Xander’s (Paul Telfer) secret accomplice will be revealed. He’ll definitely shake things up during his next stint in Salem.

Other Days of Our Lives spoilers say Kristen will stop by a patient’s room. She’ll care for someone special, so it’s undoubtedly EJ (James Scott). Sami will be hot on the trail and Brady may not be far behind. Let’s hope EJ is found soon! Elsewhere, Lani (Sal Stowers) will battle some jealousy. She’ll spot Eli and Sheila (Tionne “T-Boz” Watkins) growing closer again, so she’ll have to reexamine her feelings.

Days viewers can expect some exciting scenes over the next two weeks. We’ll give you updates as other news comes in. Stay tuned to DOOL and don’t forget to check CDL often for the latest Days of Our Lives spoilers, updates and news.