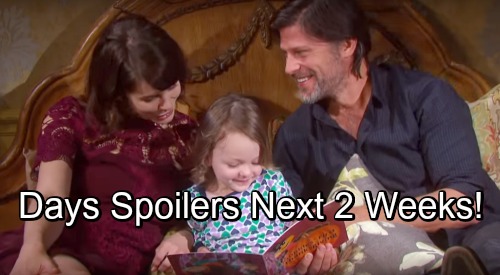 Days of Our Lives (DOOL) spoilers for the next two weeks tease that big changes are brewing in Salem. DOOL released a special preview video with highlights the rest of 2018 and the start of 2019 fans can view below.During the week of November 12-16, Gabi (Camila Banus) will be backed into a corner. She’ll have no choice but to come clean and hope that Stefan (Tyler Christopher) stays tight-lipped.

Gabi will urge Stefan to see the benefits of keeping quiet about her scheme. If he blows the whistle, he’ll seal the deal on a “Chabby” reunion and lose his shot at raising the kid. Since Stefan still believes that’s his baby, he’ll agree to play along.

Meanwhile, Abigail (Marci Miller) will give birth with Chad’s (Billy Flynn) help. They’ll bond over little Charlotte, but Chad will set up a crushing betrayal soon enough. He’ll make sure Stefan signs the papers to have Abigail committed, so she’ll be blindsided. Stefan will take her child and she’ll be locked up in a sanitarium.

Other Days of Our Lives spoilers say Paul (Christopher Sean) will make a tempting discovery. When he stumbles across Will’s (Chandler Massey) journal, he’ll consider reading it. Paul has doubts about Will’s love for him and rightly so. DOOL fans know Will actually wants to be with Sonny (Freddie Smith).

Whether Paul sneaks a peek or not, it won’t matter in the end. Days spoilers state that Brady (Eric Martsolf) will make a confession. He’ll fill Paul in on Sonny and Will’s lingering connection. They’re just keeping their feelings in check due to Paul’s paralysis, so he won’t be on board with that.

During the week of November 19-23, Paul will demand some answers from Will. He’ll want to know if Brady’s claims are true. Days spoilers say Will’s finally going to be honest, so that’ll bring a major decision for Paul. He’ll determine that he needs to join his mom in San Francisco and get a treatment that might help him walk again.

Paul will bid John (Drake Hogestyn) and Brady an emotional farewell before he goes. He’ll also have an escort to accompany him on the plane. A hunk played by Chido Nwokocha will give viewers a glimpse of Paul’s potential future. A new romance may be on the horizon off screen, so Paul will have some hope. Christopher Sean’s last airdate is Tuesday, November 20.

Unfortunately, Will and Sonny will immediately face another obstacle. This time Victor (John Aniston) will be the one standing in the way of their love. While Sonny and Will tackle that challenge, Sarah (Linsey Godfrey) will have Eric (Greg Vaughan) over for a Thanksgiving feast. They’ll spend some quality time with Holly and enjoy each other’s company.

Back with Gabi, Days of Our Lives spoilers say she’ll provoke Abigail. Gabi will stop by the mental institution to gloat about how well her brilliant plan worked. DOOL fans should note that Kate Mansi begins her new run with a first airdate on Thursday, November 29.

It sounds like the next two weeks will be crammed full of drama. We’ll give you updates as other Days news comes in. Stick with DOOL and don’t forget to check CDL often for the latest Days of Our Lives spoilers, updates and news.