BY hellodrdavis on December 3, 2018 | Comments: one comment
Related : Days of Our Lives, Soap Opera, Spoiler, Television 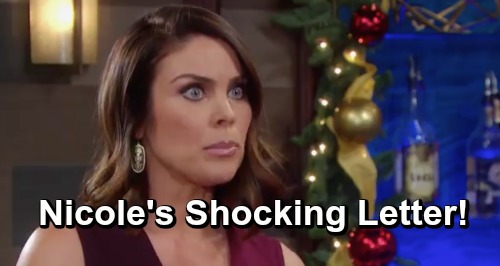 Days of Our Lives (DOOL) spoilers tease that Chloe (Nadia Bjorlin) is in for a shocker. Chloe was deeply saddened when Nicole (Arianne Zucker) perished in the DiMera warehouse explosion, but she hasn’t yet given much thought as to who should be responsible for raising Nicole’s daughter Holly (Harlow and Scarlett Mallory).

Chloe has been too wrapped up in the now-concluded Baby Bonnie drama with Lucas (Brian Dattilo) to give much thought to who should raise Holly. Plus, it’s just been too soon after Nicole’s death to think about such things. The main priority thus far has been simply getting Holly (and everyone else) to adjust to the fact that Nicole is gone.

But soon, people will start thinking about who should assume the role of Holly’s permanent guardian. There are several viable possibilities. There’s Maggie (Suzanne Rogers), who is Holly’s grandmother, who seems perfectly willing to care for Holly. And then there’s Eric (Greg Vaughan), who Nicole begged to look after Holly when she was trapped in the warehouse.

But there’s also Chloe, who feels extremely close to Holly. Nicole carried Holly to term and she naturally feels a deep connection to the little girl. And soon, Chloe will get a clear signal that she should be the person to raise Holly. Days spoilers say that Justin (Wally Kurth) will approach Chloe with a shocking letter from Nicole.

It appears that Nicole gave some thought as to what should happen to Holly in the event of her death, and that she left a letter for Chloe asking Chloe to care for Holly if anything ever happened to her. It looks like this letter will be what gets Chloe on board with the idea of raising Holly.

None of this is going to sit well with Eric, since Nicole’s dying wish was for him to take care of Holly. Of course, when Nicole wrote the letter to Chloe, she had no idea that she and Eric would find each other again and that she’d want Eric to care for Holly. But it looks like Chloe won’t budge, and she’ll be adamant that she is going to take Holly.

It sure looks like we’ll see a major war between Eric and Chloe over Holly. Who do you think should become Holly’s guardian? Stay tuned to DOOL and don’t forget to check CDL often for the latest Days of Our Lives spoilers, updates, and news.