Days of Our Lives Spoilers: Paul Confronts Will – The Truth About Love For Sonny Comes Out 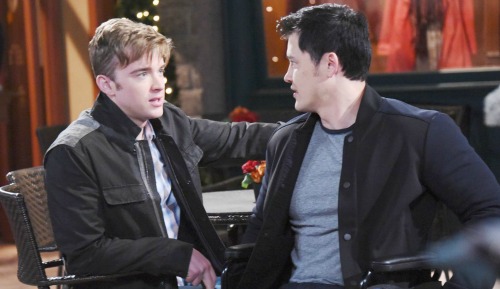 Days of Our Lives (DOOL) spoilers tease that Paul (Christopher Sean) will be getting more unsure of his relationship with Will (Chandler Massey) as time goes on. Will seems to say all the right words and does all the right things, like getting a wheelchair-accessible apartment for Paul. But Paul’s keen detective skills can sense that something just isn’t right.

Actually, deep down Paul seems to know that Will’s feelings for Sonny (Freddie Smith) have resurfaced. He overheard Will talking lovingly to Sonny on the phone, but Will played it off as if he was talking to Arianna (Harper and Sydnee Udell) instead. Paul seemed relieved by the news, but he remained bothered by the feeling that something was off.

That feeling’s going to stay with Paul, so much so that he considers doing the unthinkable: snooping in Will’s journal to get some answers. Whether he actually goes through with it and read’s Will’s private thoughts remains to be seen, but it looks like he’ll stop himself from violating Will’s privacy and just ask Will outright what’s going on.

Days spoilers say that eventually Paul will just come out with it and confront Will about his feelings for Sonny. But what is Will going to say? Will’s been pretty adamant that he’s not going to let Paul down now that Paul’s paralyzed and needs special care. But Will needs to be true to his own feelings, and deep down he really wants to be with Sonny.

Will might be surprised at how well Paul handles it when he does decide to tell Paul the truth about his intense love for Sonny. Paul’s a resilient guy, and even though he’s going through a tough time physically right now, he’ll be able to work through a breakup ok. It won’t be ideal, but Paul will survive.

Since Christopher Sean will be leaving Days shortly, we know that a Will/Paul breakup is inevitable. Will you miss seeing Will and Paul together? Stay tuned to DOOL and don’t forget to check CDL often for the latest Days of Our Lives spoilers, updates, and news.