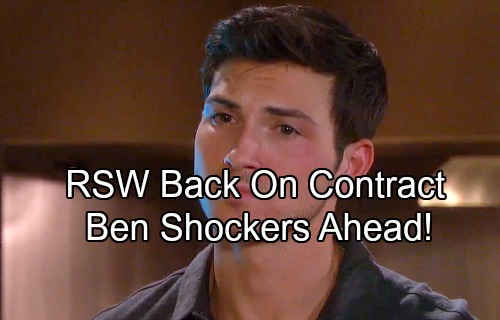 Days of Our Lives (DOOL) spoilers tease that a huge comeback’s brewing on the NBC soap. Robert Scott Wilson is returning as Ben Weston and he managed to score a contract role. It sounds like DOOL has plans for a meaty story, so fans had better buckle up for a wild ride!

There’s no word on the length of Wilson’s contract yet, but it seems to be a substantial arc. This could be tricky since Ben’s an insane serial killer. Days will have to work around Ben’s crimes and find a way to give him a juicy storyline. Let’s consider a few routes the show could take.

For starters, they could let Wilson play Ben’s long-lost twin. That would certainly throw everyone for a loop, but it wouldn’t be the best plan. Before Ben turned to the dark side, most viewers didn’t care about him at all. Ben had to become a monster before fans finally noticed Wilson’s talent. He really shines as a baddie, so hopefully Days of Our Lives will stick with that.

If Wilson is back in his usual role of Ben, there are still several ways to handle his return. It’s possible that another character will end up in the same mental institution. They could play around with that for a while and ultimately let Ben escape again. Of course, some kidnappings could go down and stretch things out.

Days could also pull off a trick by using the classic “a brain tumor made me do it” excuse. They could argue that a tumor drove Ben to commit all those horrible acts and use it to clear his name. Since Wilson thrives in bad guy mode, everyone could eventually learn it wasn’t the tumor after all. In time, Ben might prove he’s just downright evil!

Whatever the case, many DOOL watchers are excited about the possibilities. Wilson recently sent out a tweet to confirm the news and get fans interested. “BOOM! … Hello again, Salem. You look beautiful,” Wilson said. Days of Our Lives spoilers say Wilson’s ready to rock and roll, so expect some fun drama!

Are you glad Ben returning? What do you want to see during his next stint? We’ll give you updates as other details emerge. Stay tuned to the NBC soap and don’t forget to check CDL often for the latest Days of Our Lives spoilers, updates and news.