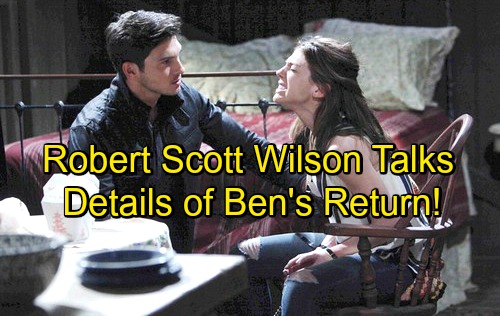 Days of Our Lives (DOOL) spoilers reveal that Ben Weston’s (Robert Scott Wilson) return is inching closer. DOOL fans are anxious to see what’s in store for this crazy serial killer. Wilson’s on contract now, so he’ll be sticking around for plenty of exciting stories. We’ll hear the first hints when Hope (Kristian Alfonso) gets shocking updates on Ben’s mental state.

Marlena (Deidre Hall) will have to do an evaluation of Ben’s sanity. It sounds like Ben will suddenly seem cured! DOOL will undoubtedly come up with some soapy explanation to score Ben’s freedom. Days of Our Lives spoilers say he’ll first reappear on June 6, so be sure to mark that date on your calendar.

Ben is headed back to Salem as a changed man, but don’t worry. He’ll keep the attitude that makes so many viewers adore him. In an interview with TV Insider, Wilson dished on his return. He offered some big clues along with the details of how his comeback came about.

“The show has come up with a phenomenal way of bringing Ben full circle and putting him in a different light without him losing his edge,” Wilson said. “They’re writing the balance between vulnerability and danger.” Wilson insisted that he loves playing this character, so he couldn’t wait to explore more of Ben’s layers.

It turns out Deidre Hall was a key player in making this return happen. “She kind of rallied for me to be back here,” Wilson said. “After our scenes, she’d say, ‘Get this kid a contract.’” Wilson’s grateful for Hall’s support and so are Days watchers! It should be fun to have Ben back in the action.

Days of Our Lives spoilers say Ben will interact with some surprising new faces. He hinted at a character in Ben’s life that fans will be thrilled about. Keep in mind that DOOL tapes several months ahead, so Wilson knows where things are headed.

“There’s one in particular I’m working with and we’re getting great [internal] feedback,” Wilson teased. “I’m excited to see what the future brings.” The latest buzz suggests that Ben and Ciara (Victoria Konefal) just might hit it off. Hope would certainly have concerns about her daughter dating a reformed murderer! This pairing would bring some fantastic drama.

Whatever the case, Ben’s comeback should be a hot topic around town. We’ll keep you posted as other Days news comes in. Stay tuned to the NBC soap and don’t forget to check CDL often for the latest Days of Our Lives spoilers, updates and news.