Days of Our Lives Spoilers: Sami Discovers Marlena-Hattie Swap – But Gets Busted By Eli 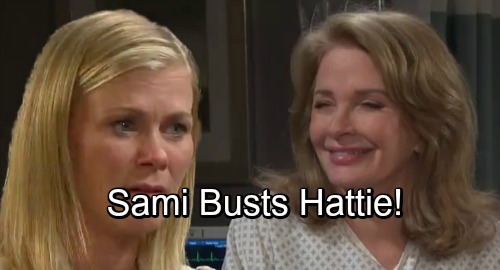 Days of Our Lives (DOOL) spoilers tease that Sami (Alison Sweeney) will figure out a major secret. She’s been in police custody since being arrested for shooting Marlena (Deidre Hall), but Justin (Wally Kurth) will soon score her release. Sami won’t be off the hook for the shooting, but at least she’ll have her freedom for the time being.

Sami has been dying to get out of custody for two big reasons. First, she wants to track down Kristen (Stacy Haiduk) and get the scoop on where EJ (James Scott) is. She’ll beeline to the DiMera mansion to follow through on that mission. But then her attention will turn to mission #2. She’ll want to talk to Marlena and say she’s sorry for shooting her.

According to Days spoilers, Sami will indeed head to the hospital to talk to Marlena. But she’ll actually encounter Hattie (Deidre Hall) who is currently impersonating Marlena while the real Marlena is off in another part of the hospital, still on life support. But since Hattie is doing a mediocre job of impersonating Marlena this time around, Sami will notice that something’s up.

Exactly what happens remains to be seen, but Hattie will likely do or say something that just doesn’t ring true with Sami. Sami will put two and two together and figure out that it’s actually Hattie in that hospital bed. Of course, this will alarm Sami, and she’ll want some answers.

Since this is Sami we’re talking about, she’ll go off in search of answers on her own, determined to find the real Marlena. But at that moment, she’ll be intercepted by Eli (Lamon Archey), who will apprehend her for violating the terms of her release. Apparently, Sami was supposed to stay away from Marlena as a condition of her release.

This will land Sami right back into trouble with the Salem PD, and it will thwart Sami’s investigation into her mother’s whereabouts. Sami will probably squawk and try to get Eli to understand that her mother has been replaced by Hattie, but her protests will likely fall on deaf ears. It will be another frustrating situation for Sami.

But good for Sami for figuring out the Marlena/Hattie swap. Do you think anyone else will figure it out? Stay tuned to DOOL and don’t forget to check CDL often for the latest Days of Our Lives spoilers, updates, and news.