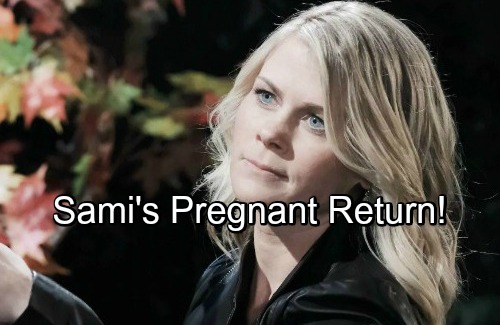 Days of Our Lives (DOOL) spoilers say a serious anvil may have just dropped. Let’s look at some big clues and how they might relate to Sami’s (Alison Sweeney) next stint. For starters, Hope (Kristian Alfonso) and JJ (Casey Moss) ran into each other at the pub. They decided to sit down and have a long chat, but why? It seems Days wanted them to talk about their somewhat similar situations.

DOOL fans will recall that Rafe (Galen Gering) hooked up with Sami during his brief split from Hope. He decided to keep that romp a secret and it blew up in his face. JJ’s breakup lasted a bit longer, but Lani (Sal Stowers) still stayed silent about a one-night stand with Eli (Lamon Archey). The betrayal was even worse since Lani got knocked up and lied about her baby’s paternity.

In fact, JJ mentioned that as the reason why his relationship problems were different. He noted that Sami didn’t get pregnant, but Lani did. JJ insisted that it changes things when a kid’s involved. Uh-oh! That sounds like a major hint about a pregnancy for Sami.

Days of Our Lives spoilers say Sami will return later this year, so she may be with child when she first shows up. Then again, DOOL could skip ahead to Sami with a baby carrier. She may be toting around a tiny Hernandez tot when she arrives.

This would actually be the perfect storyline for Rafe. He once had an intriguing conversation with Hope about kids. Rafe hinted that he’d like to be a father, but he understood that Hope probably wouldn’t be interested. She’s already raised her little ones and they’re still a real handful as adults!

Days of Our Lives spoilers say Sami will really shock in Salem this fall. Will this be one of her usual bombshells? Will she derail Hope and Rafe’s reunion once more? Anything’s possible when Hurricane Sami hits town.

DOOL viewers will definitely want to tune in for all the mayhem. We’ll give you updates as other Days news comes in. Stay tuned to the NBC soap and don’t forget to check CDL often for the latest Days of Our Lives spoilers, updates and news.