Days of Our Lives Spoilers: Sarah Horton Back and Engaged To Rex – But Baby Daddy Drama Explodes 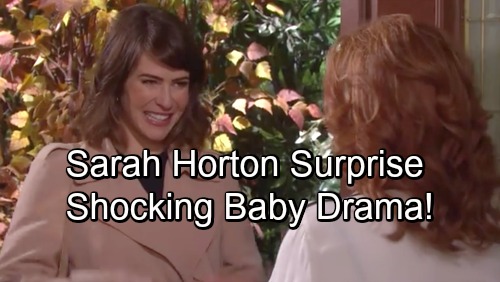 Days of Our Lives (DOOL) spoilers tease that Maggie (Suzanne Rogers) will soon get a pleasant surprise – her daughter Sarah Horton (Linsey Godfrey) will return to Salem. Sarah’s the daughter of Maggie and Neil Curtis (Joseph Gallison), and she hasn’t been seen in Salem since 1991. But she’ll be back soon with a couple surprises.

First off, it will quickly become apparent that Sarah’s been quite busy in the years she’s been gone from Salem. Sarah will be back as Dr. Sarah Horton. It will be interesting to see what type of doctor Sarah has become, and surely she’ll wind up on staff at University Hospital.

Second, Sarah will have a big announcement to make regarding her love life. She’ll come back as an engaged woman and engaged to…Rex Brady (Kyle Lowder)! How Sarah and Rex got together will be an interesting backstory for viewers to learn. But even more intriguing will be the drama that ensues when Rex and Sarah bump into Mimi (Farah Fath) and her baby.

Mimi’s baby is already at the center of some major drama between Bonnie (Judi Evans) and Lucas (Brian Dattilo), who currently thinks he’s the baby’s daddy. But Days spoilers indicate that the baby’s real father is none other than Rex, and that Rex has no idea he’s the father.

This raises several questions. Was Rex with Sarah when he and Mimi conceived the baby? Or did Mimi and Rex get together before Rex met Sarah? And how will Rex react when he inevitably finds out about his child? The baby may throw a big wrinkle in Sarah and Rex’s plans to get married.

It looks like we’re in for more baby drama with Sarah and Rex’s return. Are you excited to see them both back? Stay tuned to DOOL and don’t forget to check CDL often for the latest Days of Our Lives spoilers, updates, and news.