Days of Our Lives Spoilers: Sonny and Will Happy Together Again After Paul’s Exit – Until Leo Shows Up In Shocking Return

BY hellodrdavis on October 28, 2018 | Comments: one comment
Related : Days of Our Lives, Soap Opera, Spoiler, Television 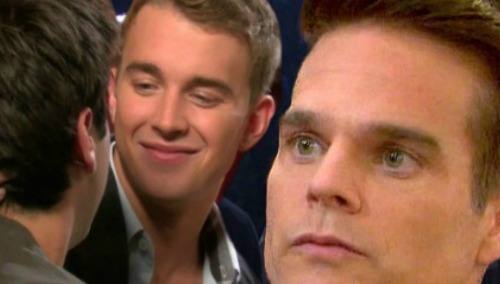 Days of Our Lives (DOOL) spoilers tease that the stage is being set for a “WilSon” reunion. Ever since Will (Chandler Massey) got his memories back, he and Sonny (Freddie Smith) have desperately wanted to be together. The only problem is that Paul (Christopher Sean) stands in their way.

Since Paul was paralyzed after falling out a window with Kristen (Stacy Haiduk), Will doesn’t feel that he can leave Paul high and dry. So Will and Sonny made a huge sacrifice: they decided to go their separate ways while Will forged ahead in his relationship with Paul.

But according to Days spoilers, Paul will soon find out about Will and Sonny’s feelings for each other, and Will and Paul will amicably split and Paul leaves town. That will pave the way for a WilSon reunion, and it looks like Will and Sonny will indeed get back together and start enjoying their life together with Ari (Harper and Sydnee Udell).

But it looks like the happy couple will soon have to revisit something unpleasant from their past. Days spoilers say that smarmy Leo (Greg Rikaart) will pop up again in Salem, along with his mother. It looks like Will and Sonny didn’t kill Leo after all!

Of course, wherever Leo is, trouble follows, so expect him to cause some major difficulties for Will and Sonny. Lawyer Ted (Gilles Marini) may get involved as well, as he’s also headed back to Salem in the near future. Recall that Ted previously tried to blackmail Will and Sonny about Leo’s supposed murder.

Leo may threaten to re-ignite his sexual harassment lawsuit against Sonny, or he may threaten to go public with the information that Sonny tried to cover up his “murder.” That’s probably something the Titan board would be very interested in hearing about, and could prevent Sonny from ever reclaiming the CEO position.

Whatever Leo does to stir up trouble, it’s going to throw a wrinkle into Sonny and Will’s tender reunion. Do you think WilSon will be able to weather the storm? Stay tuned to DOOL and don’t forget to check CDL often for the latest Days of Our Lives spoilers, updates, and news.