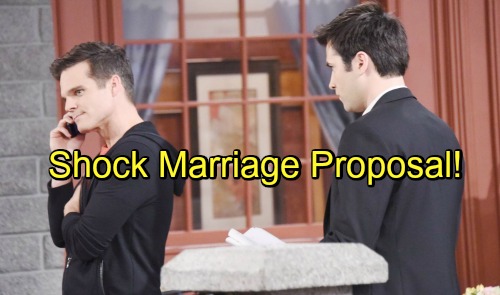 Days of Our Lives (DOOL) spoilers tease that Sonny (Freddie Smith) will be desperate to restore his reputation. He’ll wonder what it’s going to take to make that happen. Leo’s (Greg Rikaart) been spreading sexual harassment lies and he’s got a real shark as his attorney. Things are going his way, but that won’t be the case for long.

DOOL fans can expect Leo to grow quite concerned. He’ll realize the whole scheme could fall apart. Thanks to Kayla (Mary Beth Evans), Stefan (Tyler Christopher) will soon have what he needs to destroy Kate (Lauren Koslow). Leo won’t have all the details, but he’ll sense that everything’s starting to crumble. He’ll decide it’s time to make a bold move and get what he can out of this drama.

On Friday, June 29, Days of Our Lives spoilers say Leo will have a shocking proposal for Sonny. You might be thinking it’s some business proposition or payoff, but it’ll actually involve a personal commitment. It looks like Leo will ask Sonny to marry him! In return, Leo will be willing to drop his sexual harassment suit and declare his love for Sonny publicly.

Just before the final phase of the sexual harassment plot, Leo expressed some doubt. Kate’s the one who gave him the extra nudge he needed. Leo clearly had reservations about targeting Sonny, so there must be some genuine attraction there. He may realize he really blew it.

Of course, Sonny’s rich family and fat bank account are also appealing. Leo may be anxious to lock in a life of luxury. Days spoilers state that Sonny won’t want to tie the knot with Leo, but he’ll feel backed into a corner. Saying no could mean the lawsuit will move forward and permanently derail Sonny’s career.

Accepting Leo’s proposal would imply guilt on some level, but at least Sonny would look like less of a creep. However, Days of Our Lives spoilers say Will’s (Chandler Massey) going to step up to help. He’ll hope to get Sonny out of this awful predicament with a few sneaky tricks of his own.

Once Will inevitably saves the day, he’ll grow much closer to Sonny. As more memories come rushing back, “WilSon’s” love should start to bloom once again. We’ll give you updates as other Days news comes in. Stay tuned to DOOL and don’t forget to check CDL often for the latest Days of Our Lives spoilers, updates and news.