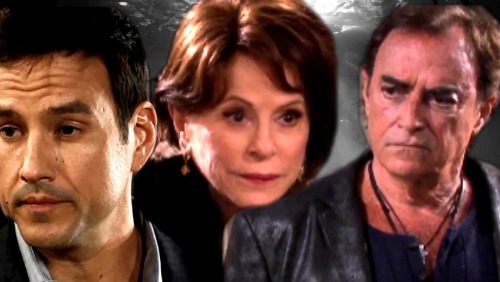 Days of Our Lives (DOOL) spoilers tease that Vivian (Louise Sorel) will feel like she’s got it all figured out. She’ll think she’s running the show in Salem now. Vivian will believe she’s in control of her puppets, Andre (Thaao Penghlis) and Stefan (Tyler Christopher). She’ll tell them what they want to hear in separate conversations, but she’ll certainly keep her own agenda in mind.

Andre wants to be the real power behind DiMera Enterprises. He knows Stefan has to be the figurehead, but he’s fine with that. As long as Andre can have true power, Days spoilers say he’ll be happy. Unfortunately, Stefan may not be on the same page about that. Vivian could struggle to appease them both as this partnership moves forward.

Of course, Vivian won’t have that problem for long. It looks like one of her partners could be eliminated soon. In fact, Vivian will likely propose the idea next week. Days of Our Lives spoilers hint that the trouble will start with John (Drake Hogestyn). After Vivian hears John giving Chad (Billy Flynn) updates, she’ll realize they’re closing in on the truth.

Vivian will worry that John’s investigation could blow everything. She’ll decide they need to take drastic action if they want to preserve their plan. At that point, the plan will probably no longer include Andre. DOOL viewers can expect Stefan to be disgusted by Vivian’s suggestion. He won’t agree with her thoughts on how to handle all this.

Will Vivian want to order a hit on Andre? Could she even push Stefan to do the deed himself? Days of Our Lives spoilers say Stefan will offer his own alternatives. He’ll feel like there must be another strategy to deal with the drama.

Stefan and Vivian will be desperate to keep the rest of the DiMera clan in the dark. Vivian may back down on the murder plot, but suspicions will emerge if Andre turns up dead. However, this could be a sneaky tactic to throw Days fans off track. Vivian should be on the suspect list, but it’d be too predictable if she became the real culprit.

Stefan will naturally get grilled as well. It should be fun to watch Vivian and Stefan face some accusations. They deserve it after the mess they’ve caused for Chad, Abigail (Marci Miller) and Kate (Lauren Koslow). We’ll keep you posted as other DOOL news comes in. Stay tuned to the NBC soap and don’t forget to check CDL often for the latest Days of Our Lives spoilers, updates and news.