BY hellodrdavis on July 12, 2018 | Comments: one comment
Related : Days of Our Lives, Soap Opera, Spoiler, Television 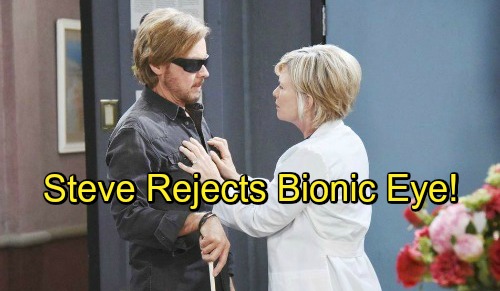 Days of Our Lives spoilers tease that Steve (Stephen Nichols) is in for an unpleasant surprise. He and Kayla (Mary Beth Evans) have been eagerly anticipating word on his upcoming “bionic eye” surgery. The couple is looking forward to the prospect of Steve regaining his vision.

But Kayla hasn’t been herself lately, and Steve can sense that something is bothering her. She’s got plenty on her mind, since she secretly brokered a deal with Stefan (Tyler Christopher) to get access to the Dimera-owned bionic eye technology. She did Stefan’s dirty work by spying on Kate (Lauren Koslow) in exchange for the bionic eye, and Steve has no idea.

Steve hates Stefan for taking advantage of Abigail (Marci Miller) when she was mentally ill. He’d rather stay blind than accept help from Stefan. So, Kayla told Steve that Dimera sold the eye technology to another company, and that this other company is providing the bionic eye to him. It’s all a big lie.

So, Kayla is in turmoil for lying to her beloved Steve, and Steve is being duped about the origins of his bionic eye. But it doesn’t look like Steve will be in the dark for long. Days spoilers say that Steve will have a tense run-in with Stefan that may derail Kayla’s carefully laid plans. Stefan likes toying with people, so he could let some clues slip about where the technology’s really coming from.

Steve’s pretty perceptive, so he’ll probably figure out from Stefan’s comments that something’s up, especially since Kayla has been acting so weird. It won’t be long until he realizes that he’s been duped. He’ll likely forgive Kayla, but chances are he’ll refuse the bionic eye knowing it’s coming from Stefan, and he’ll be furious that Stefan used Kayla to do his dirty work.

Will Steve ever get his bionic eye and trade in those sunglasses for his old patch? Stay tuned to DOOL and don’t forget to check CDL often for the latest Days of Our Lives spoilers, updates, and news.