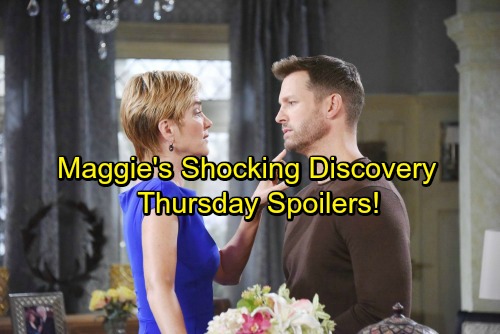 Days of Our Lives (DOOL) spoilers tease that Maggie (Suzanne Rogers) will make a stunning discovery. She does her best to keep the peace around the Kiriakis mansion, but it isn’t easy. Ever since Eve (Kassie DePaiva) moved in, Maggie’s been butting heads with her constantly.

Of course, Maggie also has to deal with Victor’s (John Aniston) constant crankiness. Brady’s (Eric Martsolf) mood hasn’t been much better lately. Nicole (Arianne Zucker) hurt Brady deeply, so he’s taken a cold turn. That’s why Brady’s willing to dupe Eve and take her for everything she’s got.

However, Days of Our Lives spoilers say Maggie could ruin the plan. She’ll soon realize that Victor and Brady are working together. Maggie will determine that Brady’s toying with Eve’s heart and she just won’t stand for that. Despite Maggie’s issues with Eve, she’ll think Brady’s being too ruthless.

Victor and Brady will undoubtedly tell Maggie to relax. They’ll probably suggest that Eve has done nothing but push Maggie’s buttons since she showed up. Days spoilers state that Maggie won’t care. She’ll think it’s cruel to put Eve through this kind of pain.

This is about more than money and power. If Brady’s DOOL plot succeeds, it’ll force Eve to lose someone else she loves. Eve really struggled after Paige’s (True O’Brien) death, so Maggie won’t want her to endure any unnecessary heartbreak. It’s clear that Eve’s had enough pain for a lifetime.

Days spoilers say Maggie will fight for what’s right. She’ll take a stand against Brady and especially Victor. If they won’t back down, Maggie may be forced to take action. She could make a bold move by filling Eve in on the truth.

Eve’s been playing Brady as well, but it’s easy to see that she’s falling for him. Brady’s starting to see Eve in a new light, too. Once both of their ruses fall apart, perhaps they can cling to their true feelings. It’ll take a while to get past all the complications, but they’ll get there.

Brady and Eve should be on solid ground by the time Theresa (Jen Lilley) returns this May. That has to be the whole point of this strange relationship! Are you looking forward to Eve and Theresa’s sister drama? We’ll give you updates as other Days of Our Lives news comes in. Stay tuned to DOOL and don’t forget to check CDL often for the latest Days of Our Lives spoilers, updates and news.