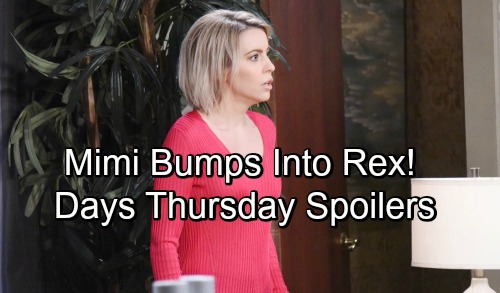 Days of Our Lives (DOOL) spoilers for Thursday, October 25, tease that Hattie (Deidre Hall) will get a special visitor. She’ll be pleased to see a friendly face – especially one that comes bearing booze! Bonnie (Judi Evans) will pop in and crack open a bottle of alcohol. She’ll shoot the breeze with her old pal and toss back a few glasses, so it won’t be long until Bonnie and Hattie are plastered.

Hattie’s poor choices will undoubtedly lead to more headaches for John (Drake Hogestyn). He needs to do something or Hattie’s going to blow this for all of them. Days fans know Kayla (Mary Beth Evans) and Roman (Josh Taylor) are in deep, too. Hattie could squeal on everyone and cause a lot of damage if they aren’t careful.

That’s why John will form a plan. He’ll hope to swap Marlena (Deidre Hall) back in soon, but he has to take care of his Hattie problem first. Days of Our Lives spoilers say John will pitch his idea to Roman. He’ll want Roman to flirt with Hattie and make her believe he’s falling in love. Maybe that’ll be enough to nudge Hattie toward a divorce and at least eliminate some of her leverage.

Elsewhere, Lucas (Bryan Dattilo) will get some infuriating news. He’ll find out that Belle (Martha Madison) is Bonnie’s new attorney, so expect a fierce outburst. Belle certainly has reservations about representing Bonnie in this DOOL custody battle. She knows Mimi (Farah Fath) and Rex (Kyle Lowder) are the kid’s real parents, so that makes everything more complicated.

Nevertheless, Belle will stand her ground and move forward with the case for now. She’ll just hope this mess doesn’t spiral out of control! Meanwhile, Mimi will run into someone she’d rather not see. She’ll have an awkward encounter with Rex, who doesn’t realize he fathered her child.

Days of Our Lives spoilers say Mimi will get nervous. Rex will probably gush about his engagement as well as Lucas’ new bundle of joy. Perhaps he’ll suggest he’d like to have a baby of his own down the road. Little does Rex know he’s got one already!

Some exciting moments are coming up in Salem. We’ll give you updates as other Days details emerge. Stay tuned to DOOL and don’t forget to check CDL often for the latest Days of Our Lives spoilers, updates and news.