Days of Our Lives Spoilers: Wednesday, August 15 – Paul Blasts Will for Lying – Eve’s Sneaky Trick Pays Off – Ted Won’t Back Down 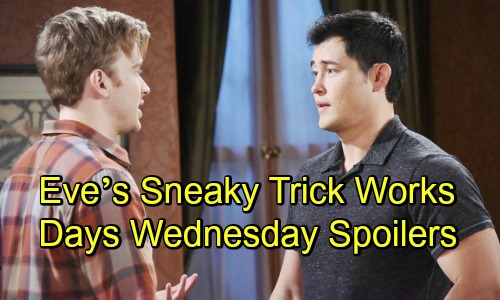 Days of Our Lives (DOOL) spoilers for Wednesday, August 15, tease that Jennifer (Melissa Reeves) will nearly confess to Eric (Greg Vaughan). She knows why Nicole (Arianne Zucker) left Salem, so keeping this secret has been tough. Jen will decide she has to get rid of all the guilt she’s been feeling, but that plan won’t pan out. In the end, Jennifer just won’t be able to come clean to her fiancé.

Since Eric will remain oblivious to the drama, he’ll focus on celebrating their engagement. Days of Our Lives spoilers say Doug (Bill Hayes) and Julie (Susan Seaforth Hayes) will join them for a mini party. They’ll raise a glass to the happy couple, so Jennifer will just have to suffer in silence. She’ll realize her actions could lead to disaster, but she just won’t see any other way to preserve her relationship.

Meanwhile, Eve (Kassie DePaiva) will concentrate on her own secret. It’s her fault Brady (Eric Martsolf) lost custody of Tate (Colin and Kyle Schroeder), but Victor (John Aniston) is willing to take the fall alone. The catch is Eve has to convince Brady to offer forgiveness.

Days of Our Lives spoilers say Eve will keep working on Brady in Wednesday’s new Days episode, August 15. She’ll insist that Victor never meant to hurt him. Eve may point out that Brady’s made his fair share of mistakes, so it’s best to understand Victor’s motives and move on. Brady will ultimately cave in, so Eve will fulfill Victor’s demands and keep her romance intact.

Other DOOL spoilers say Paul (Doug Davidson) will catch Will (Chandler Massey) off guard. He’ll tell him he found the note, confronted Sonny (Freddie Smith) and learned the truth. Paul will rant about Will’s deception and the broken trust between them. He’ll be upset that Will felt the need to lie to him about Leo (Greg Rikaart), so they need to have a long discussion about this.

Finally, Kate (Lauren Koslow) will deliver a fierce threat to Ted (Gilles Marini). She’ll warn that he’s going to lose her if he doesn’t drop his blackmail scheme. There’s a good chance Ted will pick the money instead, but that’s not going to work for Kate. She’ll point a gun at him later this week, so stay tuned for a shocking Days showdown.

It looks like things are heating up on the NBC soap. We’ll give you updates as other Days news comes in. Stick with DOOL and don’t forget to check CDL often for the latest Days of Our Lives spoilers, updates and news.