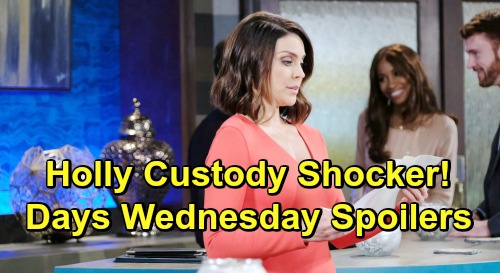 Days of Our Lives (DOOL) spoilers for Wednesday, December 12, tease that Leo (Greg Rikaart) will don a tacky suit and get ready to marry Sonny (Freddie Smith). Will (Chandler Massey) hates that they’re losing their second chance at happiness, but Sonny believes there’s no way out. He’s prepared to give Leo what he wants and put his own dreams behind him.

Leo’s tickled pink over this development, so he’ll do some gloating on Wednesday. He’ll face Adrienne (Judi Evans) and Justin’s (Wally Kurth) wrath once Sonny brings them in the loop, but he won’t care. Leo’s eager to get the money and power associated with the Kiriakis name. That’s all that matters to him, so Sonny’s loved ones can do their worst!

Days of Our Lives spoilers say Leo will rope Sheila (Tionne “T-Boz” Watkins) into officiating, so they’ll have everything they need. It won’t be long until an enthusiastic groom stands with a reluctant one for some awkward vows. DOOL fans won’t want to miss the kickoff to Leo and Sonny’s uncomfortable nuptials.

Meanwhile, Sarah (Linsey Godfrey) will keep working on Maggie (Susanne Rogers). She’ll urge her mom to see that Eric’s (Greg Vaughan) the best person to raise Holly. Maggie will start leaning in that direction, but a special delivery will bring even more custody drama.

Days of Our Lives spoilers say Justin will pass along a stunning letter to Chloe (Nadia Bjorlin). She’ll open it up and realize it’s from Nicole (Arianna Zucker). It turns out Nicole wanted Chloe to raise Holly if she passed away – at least she did back when she wrote this note. Nicole clearly changed her mind and pushed Eric to step up later, so that’ll lead to some serious Days conflict.

When Maggie gets updates on Nicole’s letter, it looks like she’ll throw her support behind Chloe. Since Parker (Christian Ganiere) is Holly’s sister, Maggie may think it makes perfect sense for them to be raised together. Chloe gave birth to Holly, so that’s another bond that Maggie will consider. She’ll know just how much Chloe would appreciate this opportunity.

However, Sarah will insist that Eric is the right choice. She’ll feel like Nicole’s final wishes should be honored, but she’ll encounter plenty of resistance on this. It sounds like some shouting matches are ahead in Salem. We’ll keep you posted as other Days news comes in. Stay tuned to DOOL and don’t forget to check CDL often for the latest Days of Our Lives spoilers, updates and news.