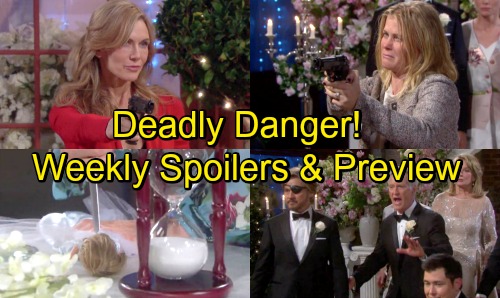 Days of Our Lives (DOOL) spoilers for the week of August 20-24 tease that love will be in the air. John (Drake Hogestyn) and Marlena (Deidre Hall) are eager to become husband and wife again, so they’ll move forward with the final preparations. They’ll hope for their dream wedding, but things certainly won’t go as planned.

For starters, John will get a black eye at his bachelor party while Marlena’s bash brings a warning. After Susan (Stacy Haiduk) shows up, she’ll insist on doing a tarot card reading. Days spoilers say disaster will be on the horizon for Marlena and Kayla (Mary Beth Evans). Susan will fill them in on the doom and gloom, but the ladies will try to put aside their fears.

Later, Susan will deliver another shocker. During a conversation with Marlena, Susan will admit to seeing Kristen (Stacy Haiduk) while she was in the psych ward. Days of Our Lives spoilers say Marlena will brush off the surprising claims. She’ll point out that Susan was drugged up and distraught, so Susan will concede that she might be mistaken.

Of course, Days fans know Kristen is truly alive and well. One way or another, she’ll play a role in the wedding chaos that’s brewing. Sami (Alison Sweeney) will also be on hand to cause drama. She’ll crash the wedding looking filthy and unkempt. Once Sami insists on stopping the nuptials, John and Marlena will express confession. That’s when Sami will reveal a gun and kick the excitement up a notch.

Word has it someone will get shot before the ceremony concludes. Most buzz points to Marlena taking a bullet and ending up in a coma. Sami clearly won’t be in her right mind if she shoots her own mother. Some evil force must be at work, which means Kristen may have found a sneaky secret weapon.

Other Days of Our Lives spoilers say the wedding will bring back crucial memories for Will (Chandler Massey). After he recalls marrying Sonny (Freddie Smith), it’ll ultimately bring his whole life into focus. Will and Sonny will lock lips as they celebrate. Over with Shawn (Brandon Beemer), he’ll get troubling updates on Ben (Robert Scott Wilson). Shawn definitely won’t approve of the loft’s new occupant.

DOOL viewers can expect Shawn to explode over the potential danger. He won’t think Claire (Olivia Rose Keegan) and Ciara (Victoria Konefal) should be living with a murderer, even if Marlena agrees he’s changed. Bonnie (Judi Evans) will also find herself in a desperate situation this week. She’ll hate the idea of landing back behind bars, so she’ll try every trick she can think of to avoid prison.

Steve (Stephen Nichols) will make sure Bonnie stays put, which is great news for Adrienne (Judi Evans). This confrontation has been a long time coming! We’ll keep you posted as other Days details emerge. Stick with DOOL and don’t forget to check CDL often for the latest Days of Our Lives spoilers, updates and news.