Days of Our Lives Spoilers: Week of May 14-18 Update – Violent Conflict, Big Bombshells and a Risky Partnership

BY Heather Hughes on May 12, 2018 | Comments: one comment
Related : Days of Our Lives, Soap Opera, Spoiler, Television 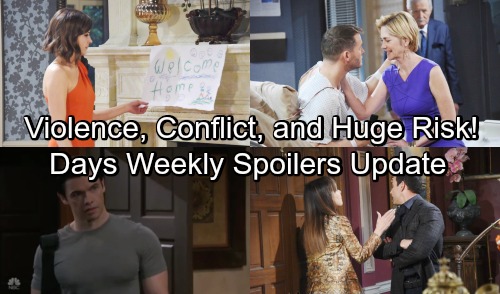 Days of Our Lives (DOOL) spoilers update for the week of May 14-18 tease that things are about to heat up in Salem. For starters, Brady (Eric Martsolf) will shut down Victor’s (John Aniston) offer. It’ll be a blatant attempt to break up Brady and Eve (Kassie DePaiva), so he just won’t be interested. After Victor stomps off, Brady will finish his proposal and finally get the “yes” he’s been dreaming of.

Eve will share some lovely moments with Brady, but she’ll endure an awkward encounter a little later. Days of Our Lives spoilers say Eve will bump into JJ (Casey Moss), her ex-lover and her murdered daughter’s ex-boyfriend. It’s obviously complicated. JJ and Eve might chat about Paige (True O’Brien) briefly and hurry on their way. They’ll undoubtedly want to escape their discomfort ASAP.

Other Days spoilers say Abigail (Marci Miller) will dismiss Justin’s (Wally Kurth) legal advice. He’ll probably think Abigail should go with a temporary insanity defense, but she won’t be interested. Abigail killed Andre (Thaao Penghlis) to protect herself and she wasn’t in her right mind at the time.

Besides, the last place Abigail wants to end up is back in a mental institution. During her last stint in a psychiatric facility, Abigail set herself on fire and escaped. She’s not eager to go down that dark road again, so we’ll see what Justin can do for her.

Meanwhile, Stefan (Tyler Christopher) and Chad (Billy Flynn) will face off again. Days of Our Lives spoilers state that Chad will throw more punches at his brother. Nearly killing Stefan just wasn’t enough. Chad will still be raging, so he’ll want Stefan to feel the pain of what he’s done.

Of course, Stefan won’t be naked in bed this time. He’ll be able to fight back, so Chad needs to be careful. After Gabi (Camila Banus) inadvertently shares a shocker, Abigail will also confront Stefan. It looks like she’ll finally get a clue about the rape, which means devastation and fury are on the way.

Finally, DOOL spoilers say Xander (Paul Telfer) will reach an agreement with Theresa (Jen Lilley). They’ll work together to get the evidence Theresa needs and get out of Mexico. Alas, Xander won’t be willing to save Chloe (Nadia Bjorlin). He’ll only help Theresa if they go alone, so she’ll have no choice but to accept Xander’s terms.

Theresa and Xander will return to Salem on Friday, so stay tuned for all the drama. We’ll give you updates as other Days news comes in. Stick with the DOOL and don’t forget to check CDL often for the latest Days of Our Lives spoilers, updates and news.