Days of Our Lives Spoilers: Week of May 21 – Eve’s Jealous Rage Over Theresa and Brady’s Warm Moment

BY Heather Hughes on May 18, 2018 | Comments: 3 comments
Related : Days of Our Lives, Soap Opera, Spoiler, Television 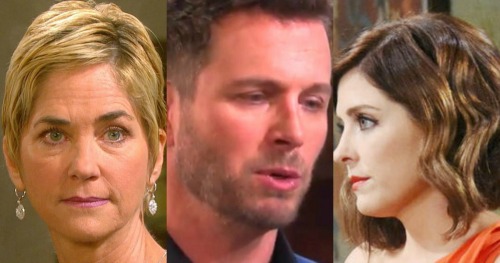 Days of Our Lives (DOOL) spoilers tease that Eve (Kassie DePaiva) will be on cloud nine over her engagement. She’ll feel like she’s finally found a good man to settle down with. Eve’s hooked up with her fair share of losers and she thought Brady (Eric Martsolf) was one of them not too long ago.

Fortunately, Brady won Eve over and now he’s ready to build a life with her. He’s thrilled about their plans for a future with Tate (Colin and Kyle Schroeder). Brady suggested that Eve’s the only mother Tate will ever need, but Mama Theresa’s (Jen Lilley) about to shake things up!

Thanks to Xander (Paul Telfer), Theresa will have a chance to reunite with her love on next week’s new episodes, May 21-25. She’ll be waiting at the Kiriakis mansion when Brady comes home. DOOL fans should prepare for some emotional moments. Theresa will burst into tears when she finally sees Brady again. She’ll give him a huge shock and frantically try to explain.

Days of Our Lives spoilers say Brady will battle some confusion at first, but Theresa will clear this mess up. It looks like Brady will understand what Theresa was up against. She couldn’t risk losing Brady and Tate to Mateo’s (Andoni Gracia) deadly wrath. Brady will be stunned to hear that Theresa saved their lives.

Theresa will also reconnect with Tate, who’s certainly grown since she’s been gone. Days viewers should see some family bonding time. Brady will struggle to wrap his head around all this, but he’ll be glad Theresa’s safe and back home. They’ll get close just as Eve (Kassie DePaiva) waltzes in, which will bring another round of shock and explanations.

Eve will immediately struggle with jealousy. She’ll most likely flash her ring and mention Brady’s proposal. Days of Our Lives spoilers say Theresa will be crushed over their engagement, but she won’t give up hope. Theresa will speak with Eve a little later and make her pitch. She’ll pile on the guilt and hope Eve will break up with Brady ASAP.

Of course, Theresa can’t erase the love that’s grown between Brady and Eve. These sisters will just have to battle it out! Brady will face a tough choice in the coming weeks, so stay tuned. We’ll give you updates as other Days news comes in. Stick with DOOL and don’t forget to check CDL often for the latest Days of Our Lives spoilers, updates and news.