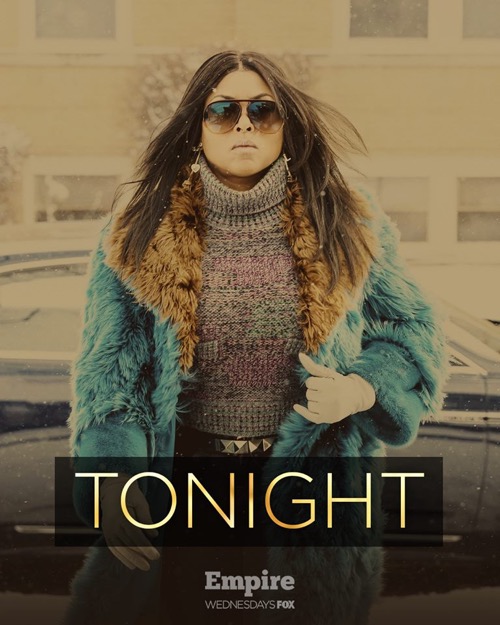 Tonight on FOX their blockbuster drama Empire airs with an all-new Wednesday, April 18, 2017, episode and we have your Empire recap below. On tonight’s Empire season 4 episode 13 called,  “Of Hardiness is Mother” as per the FOX synopsis, “Although Lucious pressures Cookie to take it easy, she can’t help but take matters into her own hands when she receives unsettling news about an old friend. Meanwhile, Tiana’s new 20 for 20 single takes off, leading to an unexpected change in her demeanor. Also, Jamal struggles to rebrand his image, Hakeem adopts a new role as musical mentor and Andre recruits Lucious to help him uncover the truth about Eddie’s intentions”

Cookie, Lucious, and the boys are sitting down eating a healthy meal after Cookie’s heart attack. Lucious gives her a fitness bracelet to monitor her heart rate. Cookie is happy he loves her but she just wants to see Andre and she wants Lucious to talk to him.

Tiana is stressed out at rehearsals. She fires the choreographer. Becky is speechless.

Cookie gets a letter in the mail from China. Meanwhile, at Empire Andre tries to talk to Lucious who is giving him the cold shoulder. Andre is adamant. He tells Lucious that somehow Empire is connected to another company that is making money off the stock values. Andre thinks it is Eddie. Lucious wants proof.

Cookie invites China over for coffee. They talk about their time in jail together. China tells her that Pound Cake has cancer.

Hakeem is in the studio with Shine. He asks Shine for help with his music but changes his mind after Shine points out that he is working with a rapper. He is tough and was raised on the streets.

Cookie goes to visit Pound Cake. While she sits in the waiting room, Cookie remembers when Pound Cake and her playing cards. Pound Cake had come back to jail after being out for 5 years. She looked for her baby the entire time but never found her.

Cookie comes in to see Pound Cake laying in bed. She tells Cookie she still hasn’t seen her daughter. They cry together. Cookie tells her she is going to find her daughter and bring her to meet her mother.

Blake, Shine’s new rapper, stops by to see Hakeem who isn’t very friendly. The two rap together, getting in digs on one another. In the end, the two shake hands.

Cookie works to find Pound Cake’s daughter. Her heart rate increases, alerting Lucious who calls her to tell her to sit and relax.

Andre and Lucious arrive to see one of Eddie’s exs at the club where she is playing tennis. She refuses to talk. They stick around and wait for her to finish. Andre approaches her. She finally talks. Lucious joins them. Eddie lost all their money on a ponzi scheme. Eddie told her to buy Empire stock.

Cookie pays a visit to the security guard that got Pound Cake pregnant. She plays nicely in front of Bo’s wife, but when she leaves to get Cookie a drink Cookie threatens Bo. He tells her that the baby went to a special adoption agency, The Hope House. Cookie heads back to the car. She makes some calls but comes up short. She goes back to Bo’s house and tells his wife about how her husband raped the inmates and how he had a baby with Pound Cake.

Lucious and Andre have discovered that Eddie has a handful of shell companies. He has been hard at working plotting. Lucious asks Andre what happened to him. He used to always have his back. Andre tells him that once he was diagnosed with bipolar he looked at him differently.

Hakeem finishes up in the studio with Blake. Shine invites them all to the strip club. Hakeem tells Blake he is the rookie and he needs to stay behind and clean the studio. Hakeem sees Tiana on his way out. He tries to talk to her but she tells him she needs to focus with no distractions.

Jamal and Tory head to a local club and ask the DJ to play their track. The crowd goes wild.

Lucious comes home to see Cookie. They talk about their day. Cookie tells Lucious that she has done a lot of thinking and that she wants them to move on, move forward, together as partners. She stands and kisses him.