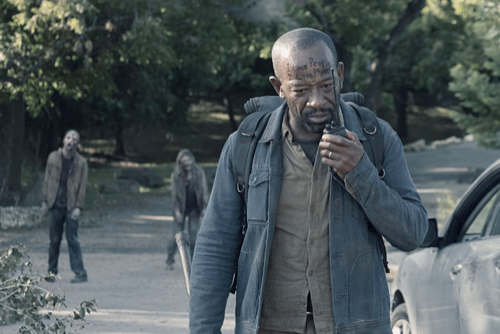 On AMC tonight Fear The Walking Dead (FTWD) airs with an all-new Sunday, September 30, 2018, finale episode and we have your Fear The Walking Dead Recap below! On tonight’s FTWD season 4 episode 16 finale called, “… I Lose Myself,” as per the AMC synopsis,  “Morgan tries to help friends in need on the season 4 finale of TWD”

Can you believe FTWD Season 4 is already coming to an end? Don’t forget to bookmark this spot and come back later for our Fear The Walking Dead recap between 9 PM – 10:30 PM ET.  While you wait for the recap, don’t forget to check out all our FWTD news, spoilers & more, right here!

Al runs from a group of walkers and finds safety in a garage. She radios to the others from a couple miles south from the hospital. No-one answers. She finds an ambulance and hot wires it. She leaves the garage and heads back to the hospital where she finds Martha with Jimbo as her new walker. Martha tells Al she doesn’t want to hurt her. She wants her to give Morgan a message for her. Al refuses. Martha knocks her out.

Al comes to. June and John are there. They circled back and found her unconscious. They didn’t see Martha. But she did video herself telling Morgan she is disappointed in him and that she will see him again. She plans to make him strong too. She sent the tape with Al.

Out by the fire, the gang talks about where Morgan plans to take them to, Alexandria. He explains where they are headed but he isn’t going. He needs to stay behind and deal with Martha. He gives John directions. John tries to talk him out of it. Morgan promises that he will meet them there with Martha. Hopefully, he can help her. They plan to meet up in 2 days. John warns him to leave her be.
Morgan radios to Martha. He plans to meet her on mile marker 54. He starts walking. Meanwhile, Wendell, Sarah, and the others are back at the gas station. June and John share a moment about recognizing what they have given to each other.

Morgan finds Jimbo in the back of a cruiser. He takes him out after a brief moment of sadness and kills him. He finds Martha in a field. She is in pain and face down. He helps her by getting her into the cruiser and starts driving. She is mad. He isn’t supposed to see her like this. He asks her who she lost. John radios. He tells him he is headed back with Martha.

Outside, Al is working on the truck. She sees some walkers coming. She jumps down to take them out but her legs become unsteady. She gets a pain. She falls to the ground. The walkers come closer. Alicia fires from a distant and takes them out.

Martha tells Morgan about her husband Hank and how no-one helped them.

June and the others have become ill fast. They radio to Morgan but he cannot hear them. Martha tells Morgan she will take the medicine. He opens the glass between them. She grabs his arm to drive them off the road. Morgan comes to with marker on his forehead. He has a tool stabbed into his leg. She did manage to slow him down from helping.

June radios for help. Morgan tries to get up. Martha taunts him. He needs to kill her and become what he used to be. Meanwhile, June and the others are weak. June thinks they need to stay hydrated. She realizes the water has been tampered with. June radios to Morgan that they have been poisoned. It must be Martha. She admits to doing it and confesses it is antifreeze. He radios back but they can’t hear him. He becomes angry and starts choking Martha, but stops as she starts to gasp. He pulls the tool out of Is leg and handcuffs her to the cruiser.

Morgan calls by radio but no-one answers. Al watches video and cries while they sit around. Morgan drops to the ground. Al finally gets in touch with Morgan. He tells them it is antifreeze. June knows it is ethanol that will save them. They have some outside. They all get ready to make their way outside. They throw the doors open and take out several walkers. Al takes out a group of walkers after they have trouble getting the ethanol.

Morgan radios to them. They cannot get the ethanol. They are back inside. They tried but they are too weak now. Morgan begs them to go and save themselves. He tells them he didn’t go back to being his old self. He needs them.

Al records herself as she dies. Suddenly Morgan comes in the front door. He made a stop along the way. They all drink Jimbo’s beer. It has alcohol in it. John jokes about Charlie being underage. They all laugh as they drink. Meanwhile, Morgan is in the bathroom washing off the marker.

Morgan goes back and puts Martha out of her misery. She has become a walker. He tells the gang he isn’t going to Alexandria. There are more people who need help. They all decide they are going to help do what Polar Bear was trying to do. They stock up and hit the road.