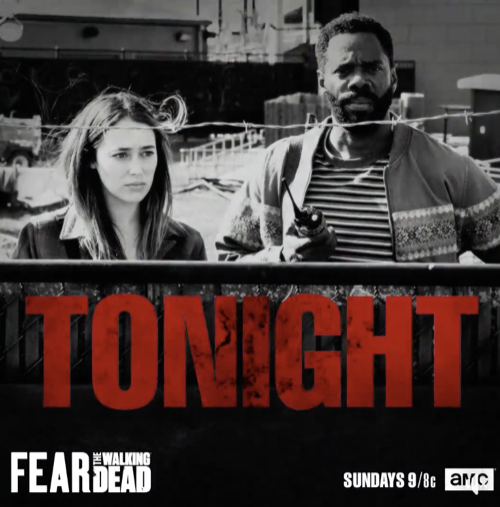 On AMC tonight Fear The Walking Dead (FTWD) airs with an all-new Sunday, April 22, 2018, episode and we have your Fear The Walking Dead Recap below! On tonight’s FTWD season 4 episode 2 called, “Another Day in the Diamond” as per the AMC synopsis,  “A troubled survivor finds allies in an unexpected place. Meanwhile, the life Madison has fought to build comes under threat.”

A troubled stranger, Charlie, is talking to Madison who asks her questions about her favorite foods – she tells her that living there is going to take a lot to get used to but it is home now. Maggie asks her what direction she was coming from when she found them and she points straight.

It’s morning and time for the wakeup call, it is 365 days in the diamond. At breakfast, Victor brings syrup to celebrate. Madison missed breakfast, she only had a few hours sleep and tells Alicia to leave her be, she is fine.

Meanwhile, Charlie asks Nick about the turnips because they don’t look good. She then asks if there is enough food in the pantries, he tells her that she doesn’t have to worry about things like that anymore.

Madison wants to head out of range to find Charlie’s family. Madison, Luciana, and Alicia head out. Their walkie talkie dies shortly after they leave. Victor and Luciana go into one building and find it picked clean. Alicia and Madison see a huge 457 written on a cloth about a silo, they wonder what it means. Madison is betting this is where Charlie came from, she is surprised she made it out alive.

Madison finds a can, with the rest of someone’s lunch – she tells Victor and Luciana to hold out for a bit. Someone puts a gun to Madison’s head and tells her to turn around. Madison tells the woman they just took in a kid called Charlie, the woman says she doesn’t know her. The woman runs off, Madison goes after her, Alicia is also there and tells her they are not going to hurt her, they are on a roof and the woman falls through to the inside of a silo, it is filled with water and walkers.

Victor tried to break the door open, he succeeds and everyone helps to kill the walkers. Everyone is ok, Luciana finds a book to bring back to Charlie. The woman they saved, her name is Naomi and she says she is sorry to Madison. She says she just camped their last night, she has been traveling the whole time. Meanwhile, Nick is burning the turnips that went bad and he is worried about his family. He tells Charlie he needs her to open the gate, he is going to go look for them on his own.

Charlie opens it, Nick is struggling with bad memories and just holds it back and heads out – Charlie closes the gate. All of a sudden, there are walkers all over the car, Nick pushes the gas and hits a pole, the car stops. Nick gets out of the car and walks back to the gate when Madison shows up and Luciana tells him to get in. Madison goes to see Charlie who says it’s ok, she knows they didn’t find her family. Madison asks her what happened at her camp, does she know who did that. It turns out that Naomi is a nurse, she takes a look at the cut on Nick’s head. Naomi and Madison talk about the camp, Madison hopes she stays.

Luciana is keeping watch when she sees a convoy of trucks coming – she yells at everyone to get inside the gate. Outside, there is one man on a bicycle, music is playing. They collect walkers inside one of the trucks, a guy spray paints the number 12 outside the truck. There is a guy sitting on a lawn chair drinking a beer, Madison heads out to speak to him. She asks him what he wants from her, he says he wants her to listen to them. He says that he knows about Nick’s bad batch of turnips.

Madison is surprised that he knows Nick’s name, he then shouts outcome here kiddo and Charlie walk out. Charlie goes and heads into one of the busses. The guy says he found her a while back, she has a knack for finding the good stuff and she found a jackpot here.

Madison tells him that he is not taking anything from them. He says he knows they are good people, he knows how many weapons they have – he says they can give them their stuff and they live or they wait for them to die. He puts out his hand to Madison and says his name is Mel.

Madison turns around to leave and Mel says she hasn’t been tested yet and they will be outside waiting. The next day, the music is still playing, Mel and his crew are still out there.

Nick is frustrated, more vegetables are infected. Luciana heads outside the gate, she brings Charlie a book that she got for her when they went to look for her family.

We fast forward to NOW, we see Morgan and his new crew.