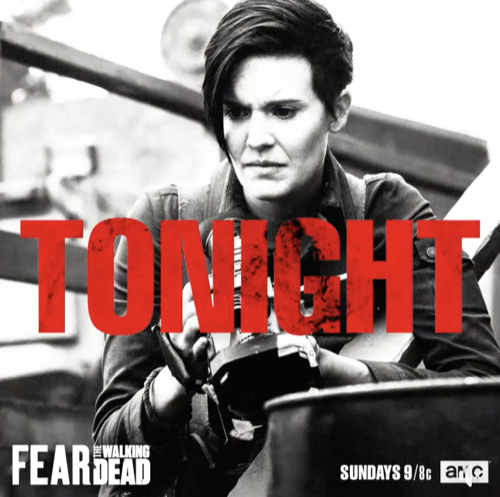 On AMC tonight Fear The Walking Dead (FTWD) airs with an all-new Sunday, June 3, 2018, episode and we have your Fear The Walking Dead Recap below! On tonight’s FTWD season 4 episode 7 called, “The Wrong Side of Where You Are Now,” as per the AMC synopsis,  “Madison’s decision to help an adversary has unintended consequences. Meanwhile, John Dorie’s life hangs in the balance.”

John is still alive, Naomi begs him to stay with her. Morgan runs to his side and both he and Naomi try to drag him out of the line of fire. Morgan tells Naomi that he is John’s friend and will stay with him, she tells him she is going to go get medical supplies to help him.

The Vultures are losing and Mel tried to get away in an ambulance, Naomi is freaking out and runs after him because all the medical supplies are in there. Alicia overhears them speaking and realizes they know each other, she shoots the ambulance and it blows up. Then Alicia turns the gun on Naomi and tells her they took her in, Naomi says it is not what she thinks and hits Alicia with a pipe. Althea comes to the rescue in her swat truck, Alicia backs down and both Naomi and Morgan get him in the truck.

Morgan sees Charlie, he tells her he is not going to hurt her and she should go with him or she will die; Charle follows him. Althea asks them where they are going, Naomi says the stadium. Meanwhile, Charlie is thinking back to better times at the stadium. Charlie asks Morgan why he saved her, he says because this has to stop someplace. Morgan tells Althea that John doesn’t have much time. Naomi keeps begging John to stay with her. Morgan tells her that John has been looking for her all this time, he never gave up. Althea asks what happened, Charlie says what happened back there was her fault.

Charlie is thinking back again to when Nick was alive. Nick thought Charlie was tricking them but Madison didn’t believe it.

Back to present day, Alicia, Victor and Luciana have a car and are on there way out when Alicia notices someone moving on the ground; Its Mel and he survived the ambulance explosion, Alicia stabs him in the head.

We go back again, Madison and Naomi are nursing Mel back to health; he is then alone with Naomi and takes a knife to her throat, she is able to get it from him. Then, once Naomi is ok, Mel tries to convince her to get on his and Charlie’s side.

Naomi tells Madison they should listen to Mel and leave, Madison refuses to, she says she built the place for her children. Madison goes to see Mel and tells him to go but he is not taking Charlie with him. Madison gives him a truck and supplies and then tells him to drive out of the gates. Nick tells Charlie that Mel is gone, she is worried, she wants to know if he is ok. Mel has a walkie-talkie in the truck with him, Charlie tries to talk to him but he keeps coughing. Nick and Alicia head out to look for Mel, Victor doesn’t stop them because Madison once did the same for him.

Alicia and Nick find him, but then they see headlights, a lot of them; there is a convoy of trucks on the road that pass them. Nick and Alicia are a half mile off when one truck arrived at the stadium. The truck turns out their lights. More trucks arrive. All of a sudden, the doors open to the trucks and hundreds of walkers are let out and head towards the gates of the stadium. A line of fire is drawn in front of the stadium, the walkers all surround the vehicle that Nick, Alicia, and Mel are inside of. Alicia tells Madison over the walkie-talkie that she is sorry, but the right thing to do was to save Mel.

Back to present day, Althea arrives at the stadium, crashes through the gates and their hundreds, maybe thousands of walkers.