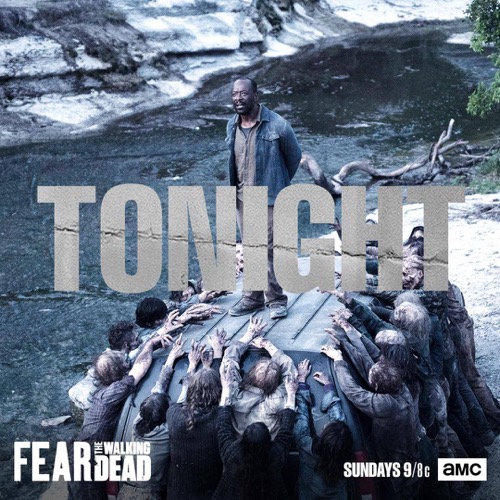 On AMC tonight Fear The Walking Dead (FTWD) airs with an all-new Sunday, August 26, 2018, episode and we have your Fear The Walking Dead Recap below! On tonight’s FTWD season 4 episode 11 called, “The Code,” as per the AMC synopsis,  “Morgan’s journey is derailed by some new acquaintances.”

Morgan gets out of the storm and finds refuge in a tractor-trailer truck while looking for Alicia. He rides out the storm, eating what he can find. The next morning comes. He hears growling outside the door. Opening the truck door slightly, he takes the walker out. He comes out to see he is at a truck stop in Mississippi with no-one in sight. He heads into the gas station and looks around. The shelves are stocked full of supplies. No-one is there, except the coffee machine is on. He turns the lights on.

He sees a walkie-talkie set up. A woman comes over the line looking for a “Polar Bear.” Morgan answers and explains his situation. He must have fallen asleep in the back of the truck and didn’t realize it was moving. She is sweet as pie and tells him in her country twang to take what he needs. He gets irritated. He wants to know who she is, but she doesn’t answer.

Morgan takes a look around and grabs a few things. He heads to the bathroom to go. As he sits on the toilet with a magazine. Someone comes into the station. He yells out that he isn’t armed. The man tells him to get out. He opens the door to a man in a wheelchair. The man wants to know why he is using the handicap bathroom. Morgan tells him it feels like a little apartment.

The man, named Wendall, and Morgan sit. He keeps a gun on him. He tells him about the lady over the radio. She told him he could take what he needed. Another woman arrives. She’s friendly and tells her brother to calm down. They talk and explain that they have been in the trucking business. They know where to get the supplies and where to drive. They load Morgan up after he tells them he has people in Virginia. They share that Virginia was hit hard by the hurricane.

Morgan hits the road. On some of his stops, he sees that the two left boxes to help others and some of the things are missing. A good sign, people are still alive. He goes out on foot. He gets to the bridge but the voices of the others ring in his ears. He radios to Wendall and tells him the bridge is out, even though it isn’t and he is headed back.

Morgan gets to the truck stop. Sarah and Wen are still on the road. They radio to him to meet them at mile marker 91. As he waits, he sees someone in trouble. They are running in a field with a bag over his head. Walkers are following him. Morgan saves him. The man was robbed of his beer recipes. The men bagged him and sent him running for his life. Morgan takes the man with him. They meet up with Sarah and Wen. When the man sees them, he tries to run for it. But Wen cocks his gun at the ready. Sarah thanks Morgan for finding the man. He has no idea what she is talking about.

Morgan learns that Sarah and Wen are actually thieves, who stole the truck from another nice man. They have also been stealing the boxes he has been leaving out. They tie up Morgan and Jim and head to Virginia. Jim tries to talk Morgan into telling Sarah and Wen where his people are in Virginia. He thinks he is going to team up with them. Morgan cannot believe him. The two tied them up and now he wants to join their scam. Jim tells Morgan all about how he was going to be rich with his brewery until the apocalypse.

The truck comes to a stop. Sarah tells them to start unloading. They have too much weight in the truck. Jim talks Sarah into a partnership. She unties him. They see walkers. They all begin to move fast. Morgan falls down an embankment and straight in front of the walkers. He runs and jumps on the hood of an abandoned car. The three of them watch as he struggles. They’ll help him if he gives them an address. He agrees. They try and decide who is going to help him. Jim has no experience with walkers. Wen is in a wheelchair. They tell him sorry. He cannot believe they are going to walk away. Sarah tells him he did. She knows the bridge isn’t out.

It is the night. Morgan is still on the top of the car. Walkers are all around. After thinking about things and radioing to Polar Bear, he jumps from the top of the car to a small hill. He slides down but manages to get to a small key/knife set on the ground. He uses a street sign to kill all of the walkers.

It is the day. Morgan is walking back to the bridge. Sarah and Wen are there waiting. He tells them he will bring them to Virginia. On one condition – they put the boxes back along the way and they also need to pick some people up and return the truck.

On the road, Morgan radios to the person who owns the truck, promising to bring it back. They don’t answer. It is a woman who writes on the face of a walker in the gas station.