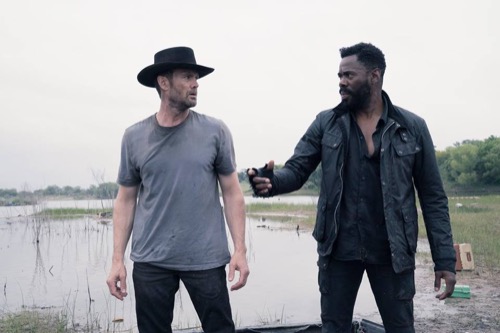 On AMC tonight Fear The Walking Dead (FTWD) airs with an all-new Sunday, September 9, 2018, episode and we have your Fear The Walking Dead Recap below! On tonight’s FTWD season 4 episode 13 called, “”Blackjack,” as per the AMC synopsis,  “Strand and Dorie are marooned. Luciana aids a man in need. The group’s efforts to help a stranger put everyone in danger.”

Morgan, Al, and June are still waiting at mile marker 27 for Quinn and wondering where he is. Meanwhile, Wendell, Sarah, and Jim are waiting by the truck. A walker is coming behind Wendell and Glen is freaking out because Sarah walked away to kill another one. Wendell stops the walker with blades that he pops out from behind his wheelchair and Sarah arrives just in time to finish him off. There is a message written on the walkers face, the same one they were writing on the boxes. June radios Quinn, and she hears a walker on the other end and then a woman who says that Quinn became who he deserved to be. Morgan recognizes the voice, it was the creepy lady that he met near one of the boxes. She tells Morgan to stop leaving the boxes, it makes him weak and she wants to be strong.

Luciana is at a library, she kills a walker by a car with a man in it. Luciana sees that he is injured, his name is Clayton, she says she can help him.

John is ready to get on the raft, Victor is watching and doesn’t believe it is going to work. All of a sudden, there is an alligator, Victor yells at John to get back and he does, safely.

Morgan wants to find John, Alicia, Charlie, and Victor, along with the guy who owns the truck, names Polar Bear. June says they have to find everyone.

John goes for a walk and finds a camper. John wants to go through the water with the camper, but Victor still worries about the alligator.

Luciana is still trying to get Clayton out of the car but can’t do it. Luciana asks him if there is anything she can do for him. Clayton says he would love to have one last beer, she says he is going to get one.

Victor gets the camper off the hill, but almost gets killed doing it over a bottle of alcohol. Victor opens the bottle, he tells John that he drinks to forget that he has nobody to drink with anymore.

Luciana is looking for beer, she finds a garage and is looking inside. Luciana only finds a bottle of root beer. Luciana is on the radio with Clayton, he says he used to have a job that took him away from everyone – when the world changed, he couldn’t help the ones he loved.

John builds another raft with the top of the camper. He convinces Victor to go with him once he develops a distraction for the alligator.

The distraction is a horn going off to attract walkers in the water for the alligator. John and Victor head inside the raft and start across the water. The horn doesn’t last long and even though a few walkers go into the water, John and Victor are in the middle and in lots of trouble. Victor jumps out and swims back, John follows him.

Luciana finds one of the boxes on the road, there is a beer inside. Luciana returns to Clayton and brings him his beer, he is very thankful. Clayton wants to give her some notebooks with information about where some supplies here. Luciana asks him what his job was that took him away from his family, he says he drove trucks. Luciana talks on the radio, say thank you to whoever left the box. Morgan recognizes her voice.

Morgan is with Luciana, she gives him the not books.

Charlie is beside one of the boxes on the roadside, she talks on the radio and Morgan recognizes her voice. Alicia takes the walkie-talkie, tells him that they are at mile marker 84. The woman comes on the radio and interrupts the conversation. All of a sudden, the woman is in Ali’s tank and coming up fast behind the van that Morgan and everyone else is inside. The women shoot at the van and tell Morgan she is going to make him strong.