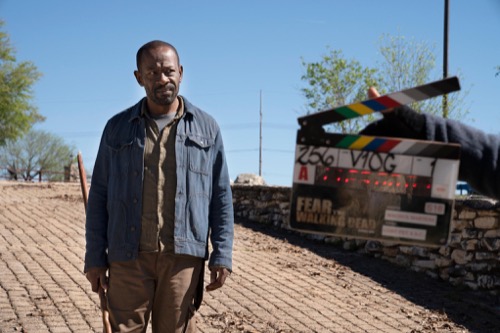 On AMC tonight Fear The Walking Dead (FTWD) airs with an all-new Sunday, August 12, 2018, episode and we have your Fear The Walking Dead Recap below! On tonight’s FTWD season 4 episode 9 called, “People Like Us,” as per the AMC synopsis,  “Morgan tries to help Alicia and this fractured group of survivors as a storm brews.”

We see Morgan killing walkers and go through their belongings; he has a lot of stuff piled up. Morgan has a walkie-talkie and he radios Al. He tells her that he and John are fine. Morgan asks if she remembers when she asked where he came from, he is not going to tell her anything, but he will show her – he is heading home and he wants her to drive him.

Morgan goes to see June and John. He speaks to John, tells him that he should never have left, Alexandria is where he belongs. Morgan says they are welcome to join him, it is a good place with good people. Morgan says his mind is made up, he is leaving tomorrow. John tells Morgan he appreciates the thought but he has everything that he was right there with June.

Morgan is back out, he kills a walker and Victor calls out to him from a window. Morgan goes inside, Victor is drinking wine. Morgan asks where everyone else is, Victor doesn’t answer, so he goes through the building – he can’t find Alicia, Luciana says she moved out a week ago. Morgan enters another building, it looks lived in, but Alicia is not there.

Morgan heads outside and finds Alicia killing walkers. He says that he knows she has been through a lot, but he thinks she can help her. Morgan makes the same offer to her that he made to everyone else, they can leave with him in the morning.

June is tending to John’s wounds, she asks him if it is true that he wants to go back to the cabin, he says yes. Victor wakes up from a drunken stupor, the door is open and there is a walker in the building; he kills it just before it goes after Luciana.

Charlie is by the water and almost gets attacked by a walker, thankfully Al saves her by killing the walker.

Walkers are coming down the river, somebody has to head out to see why; Al and June volunteer to go.

Somebody is leaving notes on wakers, Alicia figures out that by the clues that the person is at AGL, a lumber mill they passed on the way and its overrun with walkers. Morgan says he is going, Alicia insists on going with him.

John cut out some letters and tries to encourage Charlie to play a game of scrabble with her. She is not talking and he says that he had a period in his life where he didn’t talk either, but something happened, he found someone to talk to and it brought him back to the world, allowed him to forgive himself. John leaves to kill a walker and tells her he will be right back. When he is gone, Charlie leaves.

John finds Charlie gone, he goes to Victor and asks him for help. Victor says he will help but John has to drive because he drank a lot.

Morgan is still with Alicia, she finds another note that reads help. They enter a building, there are walkers and the two call them forward to lure them out, then kill them. They go into one of the rooms where a man was locked in, but he turned – they didn’t get there fast enough.

Morgan asks Alicia why she is sleeping in the greenhouse when she can help the rest like her mom did. Alicia agrees she could, but then she tells Morgan he could too and he is leaving.

Al and Laura look up and there are flocks of birds overhead, June says they need to get back now.

John is out with Victor looking for Charlie, it is pouring outside.

Morgan and Alicia are out in the rain, she walks off in one direction and tells him she will be fine, he heads in another.

Luciana is in the house, she is listening to music when she hears a noise. She raises her gun and goes to see who it is, it is Charlie. Luciana tries to grab Charlie, but she gets away and runs out in the rain. When Luciana goes back in the house she sees the book The Little Prince that Charlie left there, she runs out in the rain after Charlie.

June calls John and tells him there is a storm coming his way. Al stops the truck, when walkers are being tossed at the truck, June says what the heck is that.