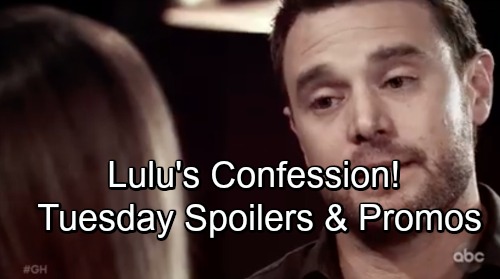 General Hospital (GH) spoilers for Tuesday, September 18, tease that Nina (Michelle Stafford) will pay Anna (Finola Hughes) a visit. After getting updates on all the Cassandra (Jessica Tuck) drama, Nina seems to be a bit rattled. She’ll ask Anna if she’s in danger, but that doesn’t seem to be the case – at least not right now.

Cassandra was mysteriously whisked away, so it should take some time for all this to play out. GH will likely let the details come slowly, especially since there’s another big Nina story underway. She’s on a mission to find her long-lost child, but Valentin’s (James Patrick Stuart) side of the search is further along.

General Hospital’s preview for Tuesday shows Curtis (Donnell Turner) talking to his “friend’s daughter.” However, it’s tough to believe Curtis has found Nina’s kid so soon. Instead, he’ll probably be chatting with another pal’s daughter somewhere in town.

Meanwhile, Sam (Kelly Monaco) will hear from Drew (Billy Miller) again. He’ll bring her up to speed on his latest chat with Kim (Tamara Braun). Based on the mopey look Drew’s sporting, Sam will guess it didn’t go well. Drew will confess that he couldn’t talk Kim into coming clean yet. They’re planning to wait until after Oscar’s (Garren Stitt) birthday, but Drew still won’t be sure that’s the right call.

Sam will want to comfort her ex, but Drew will ultimately push her away. All this bonding is bringing back some familiar feelings, so Drew just won’t think it’s a good idea. At Kim’s place, Julian (William DeVry) will drop by and suggest that he’s there to see Oscar. Julian will want to move toward a better relationship with the teen, but he seems to be running out of time.

Kim’s behavior will tip Julian off to trouble, but she’ll try to stay upbeat and pretend everything’s fine. She won’t want the secret circle to get any wider. Elsewhere, Cameron (William Lipton) will lash out at Liz (Rebecca Herbst). He’ll argue that Oscar isn’t as fragile as she thinks he is. Cam doesn’t know about Oscar’s diagnosis, so he won’t understand why Liz seems so concerned about his sparring partner.

Franco (Roger Howarth) is now in the loop, so he’ll do whatever he can to help. GH spoilers say that could add to the tension between Franco and Cameron, but maybe they can move forward sooner or later. Over with Lulu (Emme Rylan), she’ll shock Maxie (Kirsten Storms) with a confession. Lulu will admit that she’s writing the Ryan Chamberlain (Jon Lindstrom) piece for The Invader.

Maxie will be taken aback and perhaps a little irritated, but Lulu will try to get her on board. After all, Lulu won’t sensationalize this material like some other writers would. She’ll handle the story with care, so Maxie should accept that eventually.

Other General Hospital spoilers say Ryan (Jon Lindstrom) will test his impersonation again. He’ll sit down to dinner with Lucy (Lynn Herring), which will lead to some “tripping down memory lane.” When Ryan hits a snag or two as “Kevin,” he’ll put a stop to the discussion and steer Lucy in another direction. Ryan definitely won’t want to risk exposure or tip Lucy off in any way.

It sounds like another great episode’s coming up. We’ll keep you posted as other GH news emerges. Stay tuned to the ABC soap and don’t forget to check CDL often for the latest General Hospital spoilers, updates and news.