General Hospital Spoilers: 4 Reasons Why Kiki Is Nina’s Daughter – How This GH Shocker Will Work 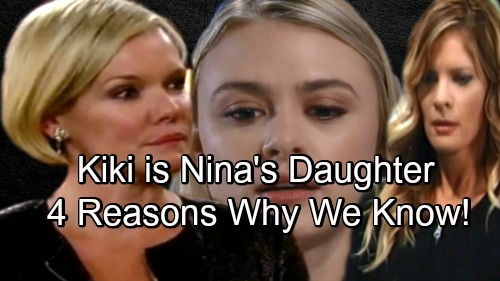 General Hospital (GH) spoilers tease that Valentin (James Patrick Stuart) will work hard to reunite Nina (Michelle Stafford) with her daughter. He’ll travel across the globe if that’s what it takes, but there’s a chance Nina’s kid is already in Port Charles. There’s one likely suspect that people have been betting on for quite some time. Kiki (Hayley Erin) is in the right age range and might be the perfect fit.

GH fans seem divided on whether or not this is a good idea. Some would argue it’s a mistake to change Kiki’s parentage, which could be true. However, the rewrite might actually work in the show’s favor. We should at least consider the positive side of all this. With that in mind, here are four reasons why Kiki should be Nina’s long-lost daughter.

1. Kiki is already an established character

If General Hospital tries to bring in some newbie as Nina’s child, it’ll be a while before people really care about her. The show could make us care right away if they use Kiki. She’s already a GH staple, so we’d be invested in the story of their reunion and the bond that would follow.

2. Nina and Kiki Are a Lot Alike

GH viewers know that Kiki and Nina aren’t saints. They’ve made their fair share of mistakes, but they strive to do the right thing. Even when they slip up, they at least battle regrets. Kiki is far more like Nina than Ava, who struggles to find remorse on any given day. Ava’s only sorry when she gets caught! It’d be interesting to see Kiki have a mom who sees things from the same perspective.

3. Kiki’s messy life would get messier

Kiki’s been stuck in major drama lately, so what should General Hospital do about that? We say pile on even more! Kiki would really be thrown for a loop if she found out Nina was her biological mother, not Ava. That means Avery (Ava and Grace Scarola) wouldn’t truly be Kiki’s sister. Kiki would face an identity crisis, so she’d get a great story along with Mama Nina.

4. Ava would get darker

Ava turned to the dark side again after she found out about Griffin (Matt Cohen) and Kiki’s sex session. She could go even darker if this Kiki revelation unfolds. Once the potential truth’s out, Ava may have no reason to hold back. Her revenge could reach a nasty level and pull Nina into the chaos. Maura West is at her best when she’s playing evil Ava, so GH should play it up!