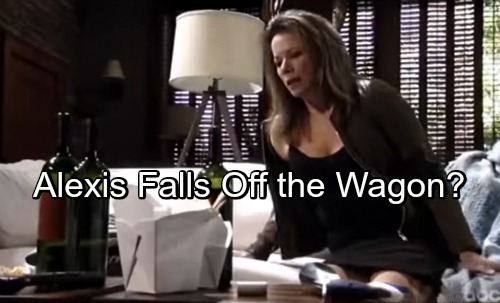 General Hospital (GH) spoilers tease that Alexis Davis (Nancy Lee Grahn) could soon do something reckless. She accidentally overheard Hamilton Finn’s (Michael Easton) love confession to Anna Devane (Finola Hughes), so she’s not in a great frame of mind right now. Alexis will have a hard time moving past this pain.

GH fans saw the tears in Alexis’ eyes after that crushing moment. She was so upset that she walked away from her Pioneer Award and headed to the Metro Court bar! Finn feared Alexis might be drowning her sorrows, but she assured him she only ordered a club soda. However, Alexis may switch to something stronger if she can’t figure out how to cope.

Alexis isn’t a woman who cries often. She obviously became much more attached to Finn than she meant to. Alexis knew Finn was stuck on Anna when she started this romance, but she probably thought she could keep her guard up. She certainly never expected to fall for him quite like she did.

On May 24, General Hospital spoilers say Alexis will do something she regrets almost immediately. She might gulp down a drink and quickly hate that she threw away her sobriety. Later, Alexis will bump into Kevin (Jon Lindstrom). He may think therapy could help Alexis work through her issues.

Alexis will do her best to identify the root of the problem. She’s used drinking as a crutch in the past, but she was just masking what’s under the surface. Alexis really has to go deeper here. She tends to get in relationships that are bound to fail. Alexis needs to learn why she’s drawn to these situations and see what changes can be made.

Both Finn and Alexis’ ex, Julian Jerome (William DeVry), will be worried about her. They may reach out and offer some support. However, Alexis has to find her own path right now. She just might get herself turned around – and for good this time!

If Alexis falls off the wagon, she’ll surely get straightened out and hopefully resolve what drives her to drink in the first place. After that, Alexis can heal her broken heart and find love again down the road. Despite Julian’s mistakes, he still cares deeply for Alexis. Julian’s a new man with new goals, so perhaps true reconciliation is possible.

Julian and Kim Nero’s (Tamara Braun) romance has been a lot like Alexis and Finn’s. They’re friends with benefits, but they’re carrying torches for other people. As Kim grows closer to Drew Cain (Billy Miller), maybe Julian will inch closer to Alexis. Could “Julexis” get a new beginning at some point? Fans of this pairing are definitely rooting for them!