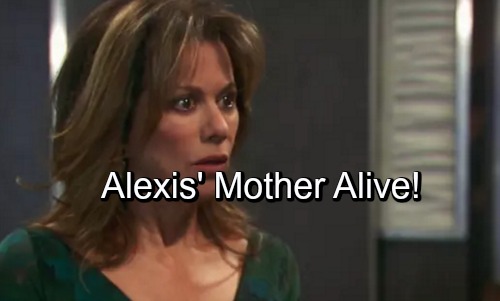 General Hospital (GH) spoilers tease the ABC soap could be planning a shocker. There’s been a lot of talk about Alexis Davis’ (Nancy Lee Grahn) mother lately. That could be a huge hint about what’s to come. Perhaps Kristin Bergman didn’t die at the hands of Helena Cassadine (Constance Towers) as Alexis remembers. Could her mom still be alive?

It’s possible Mikkos Cassadine (John Colicos) is behind Kristin’s survival. His men rescued baby Kristina Cassadine (Jaime Ray Newman), so maybe they were also able to save Kristin’s life. When soap plots revolve around deceased characters, they often turn out to be back-from-the-dead storylines.

Alexis recalls watching Helena slit Kristin’s throat and cut out her tongue, but she was just a kid at the time. She suffered a very traumatic ordeal, so she may be forgetting the rescue that came afterward. If Mikkos’ men arrived to save Kristin, she would’ve lost a lot of blood. This could’ve resulted in a coma or severe brain damage. Kristin obviously wouldn’t have been able to care for her children.

Mikkos may have stashed Kristin away to recover as best as she could. She might still be in hiding somewhere. Valentin Cassadine (James Patrick Stuart) has been doing plenty of research on his family, so GH is setting up some intriguing possibilities.

Thanks to Valentin, Alexis now has Kristin’s silver watch along with an old photo and a record. Valentin mentioned finding the watch on Cassadine Island, but why did he wait until now to hand it over? Perhaps he’s been doing some unpacking. He could probably use a distraction since Peter August (Wes Ramsey) is still missing and his marriage to Nina Cassadine’s (Michelle Stafford) in jeopardy.

Valentin may have more boxes to look through, so he could easily stumble across some crucial documents. One of them might point to a facility where Kristin was taken. With a little more digging, Valentin could find out that she’s still alive and possibly out of lengthy coma! Stranger things have happened on General Hospital.

Alexis longs to understand her mother’s actions, so being able to visit her would help with that. Kristin may not be able to talk, but she could write her thoughts and convey her point of view. Would you like to see this stunning reconnection?