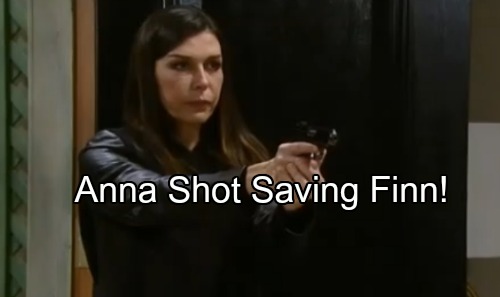 General Hospital (GH) spoilers tease that Anna (Finola Hughes) will grow increasingly desperate. She just approached Faison (Anders Hove) with her weapon raised, but he’s got a gun pointed at Finn (Michael Easton). Faison will vow to blow Finn’s head off unless Anna cooperates. He’ll insist that she needs to hand over her firearm and do exactly what he says.

Anna will be reluctant to give Faison the upper hand, but he’s really already got it. She’ll worry that Finn will be killed if she doesn’t obey orders. Faison knew Finn would be Anna’s weak spot and that’s why he’s using him. Anna may let Faison have his way on one condition. She’ll hope to make sure Finn stays unharmed.

Anna clearly cares about Finn more than she’s been willing to admit. Finn’s been covering up his deep feelings as well. They’ve fallen hard for each other, so that’s going to create some tricky moments. Their love will allow Faison to run the show briefly.

What happens if Anna surrenders and offers to give Faison what he wants? It’s tough to believe Finn would let Anna sacrifice herself like that. He might make a move that puts them both in danger. Whenever a gun’s present, there’s almost always going to be a struggle over it. 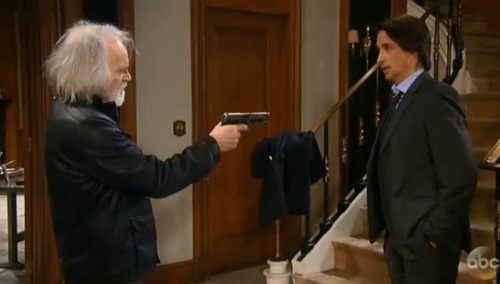 Finn may leap into action and try to get Faison’s weapon away from him. If it fires, it could pump a bullet straight into Anna. Then again, Anna may dive in front of Finn to protect him or simply face Faison’s wrath herself. Faison may decide that if he can’t have Anna, no one can.

Regardless, it looks like Anna could end up with a serious gunshot wound. A recent General Hospital promo shows Finn hovering over someone’s bloody body. Could a dying Anna will be wheeled into GH on a gurney.

General Hospital spoilers say Anna will survive the trauma ahead, so that’s good news. The ordeal will bring pain and terror, but Anna and Finn should come together after this. Every soapy cloud has a silver lining! We’ll give you updates as other GH details emerge. Stick with the ABC soap and don’t forget to check CDL often for the latest General Hospital spoilers, updates and news.