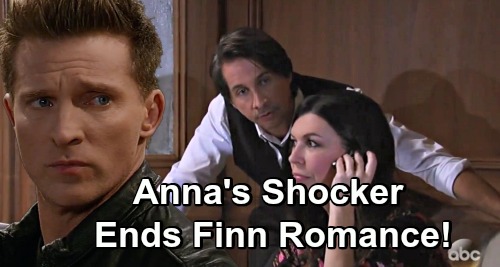 They probably wouldn’t have done it just yet without Emma’s push, but the idea of living together felt right. Finn and Anna are definitely at that stage of their relationship.

Things will keep moving in a positive direction, which is a sure sign of trouble ahead. The happier a soap couple gets, the harder they have to fall. General Hospital spoilers say a stunning event is on the way.

Anna will be deeply affected by a twist that turns her world upside down. She’ll be left reeling and it could take a toll on her romance. Anna may be too wrapped up in her own drama to focus on Finn.

General Hospital spoilers say this event will draw other characters into the situation, too. Jason Morgan (Steve Burton) will be one of the people caught in the mess. What kind of bombshell is GH cooking up? There are some interesting options to ponder. The first one is grim, but we have to at least consider it.

That could lead to Anna digging for answers herself and getting too involved for her own good. It’s doubtful Ryan would succeed, but he might leave Anna in bad shape. That’d certainly be a way to shake up “Fanna.”

Then again, Griffin himself could be at risk. He’s like a son to Anna, so a near death experience for him would be quite disturbing. As for how Jason would fit into any of that, it wouldn’t be too hard.

As General Hospital has consistently proven, Jason can be inserted in almost any storyline. He often shows up to play the hero, even when other characters would make more sense.

Of course, Anna’s event could relate to another loved one or perhaps something in her past. Many General Hospital fans weren’t thrilled with the rewrite that made Peter August (Wes Ramsey) Anna’s son.

In fact, plenty of viewers have called for it to be rewritten again. That seems like a long shot here, but it would certainly rock Anna to find out a big mistake’s been made.

However, Anna and Peter seem to be on the path to a solid mother-son relationship. GH may not want to mess with that now. Instead, Peter might be the one who gets tangled up in Ryan’s dangerous drama. Nearly losing Peter could leave Anna even more determined to know him after his recovery.

Whatever the case, something major will hit for Anna and that means Finn will no longer be her priority. Can this couple handle their next crisis? We’ll give you updates as other GH news comes in. Stay tuned to the ABC soap and don’t forget to check CDL often for the latest General Hospital spoilers, updates and news.