General Hospital Spoilers: Are Jason and Sam Getting Back Together? Signs Point To The Return of JaSam 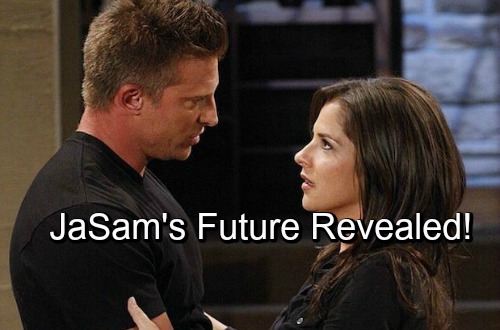 General Hospital (GH) spoilers tease that Jason (Steve Burton) will have a lot to deal with in the upcoming days. He’s broken Carly (Laura Wright) out of Ferncliff and will have to deal with the repercussions of that. He’ll also have Margeaux (Elizabeth Hendrickson) on his case regarding the memory drive she found in her hotel suite.

But there’s something else that’s been going on lately with Jason, and it involves Sam (Kelly Monaco). General Hospital fans notice that the two have been spending a lot of screen time, with Sam offering Jason moral support and a friendly ear as he’s been dealing with Carly’s Ferncliff situation and Michael’s (Chad Duell) saga with Nelle (Chloe Lanier). Their bond has been apparent in these GH scenes.

Sam and Jason have also spent quite a bit of family time with Danny (T. K. Weaver) lately. The three watched 4th of July fireworks and recently hit the gym together, with Jason giving Danny boxing tips. One can’t help but wonder with all these signals whether Jason and Sam are on the path to a reunion.

At the same time, ABC is streaming Jason and Sam’s greatest General Hospitalmoments on its app. Until September 30, JaSam fans can watch 15 episodes highlighting key moments from the supercouple’s history over the years.

General Hospital spoilers ask if the network is pushing for a JaSam reunion? It certainly seems as though it wants to remind viewers about the couple’s most poignant moments.

Or does the network have another reason for wanting to remind viewers about Jason and Sam’s history? While many GH fans would love to see the couple happily reunite, the more likely scenario involves drama. Perhaps there’s a hot storyline and/or conflict involving Jason and Sam coming up in the near future.

Whatever the case, it seems that the network is setting up something interesting for Jason and Sam. What will it be? Stay tuned to the ABC soap and don’t forget to check CDL often for the latest General Hospital spoilers, updates, and news.