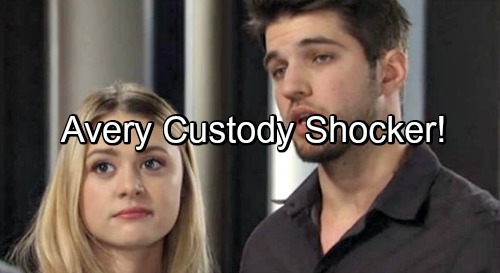 GH buzz says that Ava Jerome (Maura West) may soon be accused of murdering Kiki herself and framing Griffin Munro (Matt Cohen) for it. This could provide CarSon with an opportunity to sue for sole custody of Avery Corinthos (Ava and Grace Scarola).

Using Ava’s legal problems to gain sole custody of little Avery may seem cruel and ruthless but both Carly and Sonny see Ava as an enemy, and they are correct in this view. Given that Ava’s other daughter was murdered and she is in extreme grief might not seem like a nice time to attack but they will easily rationalize such a decision as being in Avery’s best interests.

Ryan Chamberlain (Jon Lindstrom) has not been exposed yet as the murderer and in the meanwhile Sonny and Carly may have a good case to present as to why they should have sole custody in order to protect Avery from Ava.

Neither Sonny or Carly would put it past Ava to have murdered Kiki to get revenge on both her and Griffin, and Sonny will be quick to defend Griffin. Other General Hospital spoilers tease that suspicion will shift from Griffin to Ava when the story of her setting up Griffin and Sasha Gilmore (Sofia Mattsson) to appear to have had a drunken romp under the covers is brought to the PCPD’s attention.

Then there’s the situation of Mary Pat Ingles’ (Patricia Bethune) decapitated torso having been found clutching Carly’s hair….in Ava’s gallery! Ava may possess neither the strength nor the surgical skill to have actually committed that murder, but she does possess one other thing….mob ties. An argument could be made that Ava could have easily ordered a hit in order to frame Carly.

A mother who’s being charged with the murder of an adult daughter and possibly Mary Pat doesn’t stand much of a chance of retaining custody of a toddler daughter. Keep watching GH and keep checking General Hospital spoilers frequently to keep up with these exciting developments!