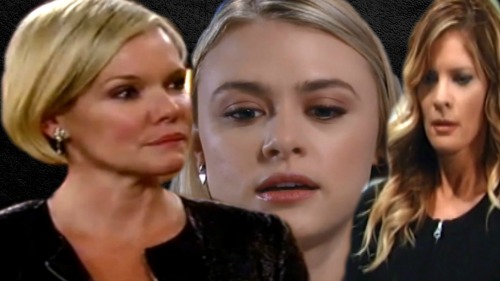 General Hospital (GH) spoilers tease that Ava (Maura West) will continue to have only one thing on her mind. Now that Griffin (Matt Cohen) and Kiki (Hayley Erin) have betrayed her, Ava just wants revenge. She worked so hard to be a better person for Griffin’s sake, but she feels like it was a giant waste of time. Why should she change who she really is for that hypocrite?

In the real world, people should always strive to be loving and kind. In the soap world, it’s a different story. We need villains, schemers and characters who are downright bad to the bone! Ava’s been fighting her true nature, but not anymore. She’s letting her evil side take over, so there’s no predicting how low Ava will go. Many Ava fans wouldn’t have it any other way.

Everyone was waiting on the hookup to be exposed, but that certainly wasn’t the end of this storyline. Ava’s just getting started! She nearly cost Kiki the sexual harassment trial by forcing that tidbit out in the open. However, Kiki ultimately pulled off a victory and scored plenty of cash.

Ava’s not exactly mad about that since Dr. Bensch (James DePaiva) is so horrible, but she still needs a plan to make Kiki suffer. She basically cut Kiki out of her life and vowed to keep her away from Avery (Ava and Grace Scarola), but that won’t be enough. Ava can undoubtedly do far worse.

Griffin (Matt Cohen) was suspended thanks to the info Ava offered Monica (Leslie Charleson), but she should make matters worse for him, too. Perhaps Ava can dig up more dirt or possibly manufacture evidence. She could make sure Griffin officially loses his job at GH. There should be other sneaky strategies Ava can use as well. She’s awfully resourceful, so she’ll surely think of something.

GH’s executive producer, Frank Valentini, promises some good stuff’s brewing. He dished on what’s ahead in an interview with Michael Fairman. “Ava explodes over the next couple of weeks and has a major, major story,” Valentini said. “Maura West has never been better!”

It looks like that story could carry over into fall, so it could tie in with a shocking story twist. Since we know Nina (Michelle Stafford) will probably be reunited with her long-lost daughter, there’s a chance it could be Kiki. If General Hospital reveals Kiki isn’t really Ava’s flesh and blood, the claws could really come out! Nina may have to step up and protect Kiki from whatever Ava has in store.