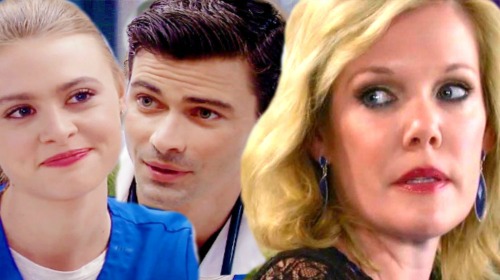 General Hospital (GH) spoilers reveal Ava Jerome (Maura West) will not only be lashing out at lover Dr. Griffin Munro (Matt Cohen), she will also be “taking care” of her daughter, Kiki Jerome (Hayley Erin). This won’t occur before Griffin and Kiki finally lock lips and after Ava strikes we can expect a terrible response from Kiki after learning what her dear mother did.

Viewers of General Hospital know that the mother-daughter duo have had a rather difficult relationship for as long as they have been on the show. This is not only due to Ava’s incessant need to insert herself into Kiki’s love life (literally!), but also her obsession that turned lethal, resulting in the death of Kiki’s then-boyfriend, Morgan Corinthos (Bryan Craig).

GH spoilers tease that Kiki has moved on with her life and began to focus on a career in medicine, resulting in a close relationship with Griffin, former priest-turned-turned-doctor. Ava Jerome, who appeared to have had an epiphany after nearly dying in a warehouse fire fell for Griffin, who eventually gave up the priesthood to pursue a relationship with the repentant mob princess. 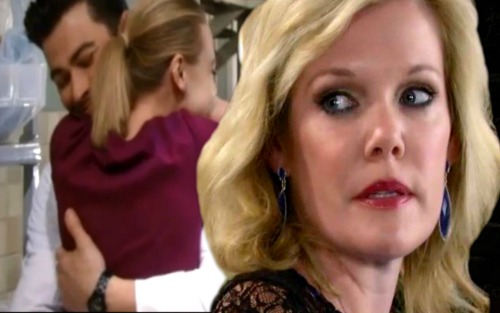 Unfortunately, Ava continues to be suspicious about Griffin’s connection to Kiki and lashes out which seems to be completely unfair as the man has been totally devoted to one woman – Ava. Valentine’s Day is approaching and Ava is looking forward to spending the special day, set aside for lovers, with her man, but it looks like things not go according to plan.

General Hospital spoilers suggest that Kiki better watch her back when it comes to her mother, because Ava is known for taking no prisoners when she is betrayed. Ava had no qualms switching out Morgan’s bipolar medication with placebos to ensure he stayed away from Kiki.

She had no problems turning her back on her brother, Julian Jerome (William deVry) or her half-sister, Olivia Jerome (Tonja Walker). What would it take for her to turn on Kiki, especially after their recent run in at Kelly’s? Kiki betrayed her mom and made sure Ava knew she would follow Sonny (Maurice Benard) and Carly Corinthos’ (Laura Wright) requests to keep Avery away from her… and now Kiki and Griffin betraying her too?

Ava has a history on General Hospital – when she is upset people die. What do you think Ava has in store for her daughter, Kiki? Even more seriously, Ava will never be able to handle losing Griffin to another woman. If that woman wasn’t Kiki, GH spoilers claim she’d be dead already – but after all Kiki is her daughter.

Will Ava be able to watch Griffin move on with another woman, in this case Kiki, and let him live? Will her re-emerging inner monster be able to handle the jealousy and rejection… or would she rather see Griffin dead!?!

How do you think this karmic love-triangle will play out? The great irony is that when Ava was scarred and ‘ugly’ she became kinder and more human – but now that the scars are gone and the beauty is back the monster has returned. Be sure to tune into ABC’s General Hospital (GH) to catch up on everything happening right now in Port Charles. Check CDL General Hospital spoilers often for updates, news, and spoilers!