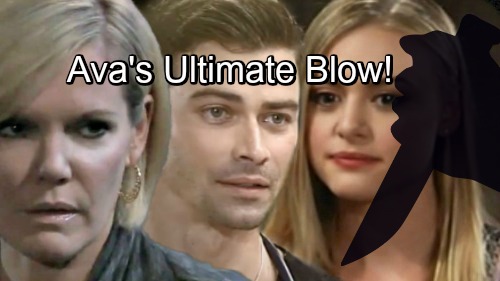 General Hospital (GH) spoilers tease that Griffin (Matt Cohen) and Kiki (Hayley Erin) will have a pleasant encounter – at least it’ll start out that way! Kiki recently ran into Griffin in the park and expressed a hint of concern. It’s clear that their friendship means a great deal to her, so she was hoping all the Ava (Maura West) drama wouldn’t interfere.

Thankfully, Griffin was on the same page. They agreed to schedule some friendship time, but it seems this meeting will be a happy accident. There’s a good chance Kiki and Griffin’s chemistry will be on full display. General Hospital spoilers say they’ll enjoy hanging out and catching up. Of course, there won’t be much to report on Griffin’s end. Due to Ava’s dirty move, Griffin’s still suspended from GH.

Kiki will likely urge Griffin to stay positive. She knows what a great doctor he is, so she’ll hate the idea of Ava taking that away from him. Kiki might argue that Ava’s hurting the patients more than Griffin himself. She’ll hope he can eventually get back to his usual duties and pull off some medical marvels as usual.

General Hospital spoilers say Griffin will appreciate Kiki’s support. He’s angry with Ava, but their breakup has still been a major adjustment. Griffin left the priesthood after falling for Ava, so his feelings were very real. Now he’s temporarily out of a job as a doctor and doesn’t know if he’ll ever be reinstated.

Griffin probably feels like he’s lost just about everything, so having Kiki as a constant source of comfort is crucial. She can be Griffin’s rock and he can do the same for her. After all, Kiki’s going through an adjustment period, too. It’s almost like she’s grieving the death of her mother. Ava wants nothing to do with Kiki now, so the younger Jerome will just have to press on.

Unfortunately, that could be difficult. Ava obviously isn’t going to let go of her rage. In fact, that rage will only grow stronger. General Hospital spoilers say Ava will hit the roof during the week of September 17-20. It seems likely that she’ll witness a close moment between her traitor of a daughter and her betraying ex.

Kiki and Griffin already knew they were targets, but they don’t know what Ava’s cooking up next. General Hospital spoilers state that Ava will decide to rev up her revenge mission. As Kiki and Griffin’s connection strengthens, Ava will put a plan in motion to destroy them. Can their blooming love survive or will Ava succeed in driving them apart?

Perhaps GH fans shouldn’t give up on Griffin and Kiki’s bond just yet! We’ll give you updates as other news and rumors emerge. Stay tuned to the ABC soap and don’t forget to check CDL often for the latest General Hospital spoilers, updates and news.