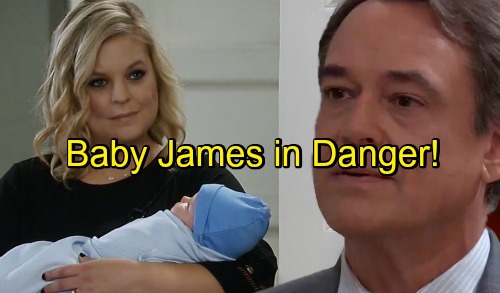 General Hospital (GH) spoilers tease that big trouble’s brewing in Port Charles. Ryan (Jon Lindstrom) is gearing up for some deadly drama, so GH fans are anxious to see how it all plays out. As long as Kevin’s (Jon Lindstrom) trapped at Ferncliff, Ryan will be free to wreak havoc around town. He’ll certainly make the most of this opportunity in the coming weeks.

Lucy (Lynn Herring) could be at risk since she’s hovering a bit too close. Laura (Genie Francis) will definitely pose a threat to Ryan’s plan as well. He wouldn’t hesitate to go after anyone who gets in his way. However, Ryan’s main target will remain Felicia (Kristina Wagner). He’s still obsessed with her, so expect some major manipulation. Felicia may not know what hit her soon enough!

GH might’ve just dropped a huge story hint. During a chat with Felicia and Mac (John J. York), Ryan was confused by the mention of James. That naturally raised a few eyebrows at the table. After Felicia noted that it was her grandson, Ryan did his best to recover. Lucy figured “Kevin” must be feeling a bit under the weather, so that helped smooth things over.

General Hospital made a point to bring up James once more before the chat wrapped up. Ryan clarified the name again as Felicia was leaving. He may have been filing that info away for later use. It’d be smart to pull Maxie (Kirsten Storms) and her kid into this storyline. If Ryan wants to torment Felicia, there’s no better way to do it than using her family.

Perhaps all this is building to James’ kidnapping. Ryan could swipe the little fella and start making demands. This might be a last-ditch strategy if Felicia learns who he really is. Of course, Felicia would be quick to hand herself over if James’ life was on the line. She’d tell Ryan to do his worst as long as James stays safe.

This could pull Peter (Wes Ramsey) into the story as a potential hero as well. There’d be plenty of places GH could go with this. Whatever happens, General Hospital spoilers say you should keep an eye on James and prepare for chaos! We’ll give you updates as other news comes in. Stick with the ABC soap and don’t forget to check CDL often for the latest General Hospital spoilers, updates and news.