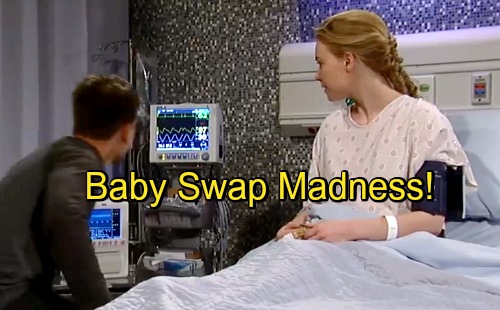 General Hospital (GH) spoilers tease that the ABC soap is building to some big moments. Nelle (Chloe Lanier) took quite a tumble at the Quartermaine mansion, but things have worked out OK for her so far. She was able to point the finger at Carly (Laura Wright) and her baby’s just fine according to Kim (Tamara Braun).

However, red flags were raised when Kim pushed to keep Nelle an extra night. Kim insisted it was just a precaution, but viewers know there’s probably a soapier reason. At the Nurses Ball, Maxie’s (Kirsten Storms) been talking about how active her baby is. She’ll be giving birth soon enough, so that could put her at GH while Nelle’s still around.

Naturally, this is the prime setup for a baby swap. If Nelle experiences some unexpected complications, it could lead to her special delivery as well. Brad (Parry Shen) and Lucas (Ryan Carnes) are also set to adopt a kid, but there are no updates on when their little one will appear. They were supposed to get their baby around the same time as Nelle’s due date, but she may have an early arrival.

Lucas and Brad’s story could get tangled up in all this later, but let’s focus on the pregnant ladies right in front of us. Maxie and Nelle will be in the same hospital. They’ll most likely have their babies on the same day. It’s all too fishy to ignore!

On the new GH episode May 24, Nelle will get the support she so desperately desires. That same day, Carly will be distressed. It sounds like Michael (Chad Duell) will be on Nelle’s side by then, so a baby crisis might nudge him in that direction. Carly may be upset about the baby’s failing health as well as Michael turning against her.

Michael and Nelle could bond as their kid fights for his or her life. Of course, Nelle might pull a switcheroo if she sees the situation’s getting too bleak. After all, Maxie’s baby will be right there for the taking. Since Nelle’s such a schemer, this would be the obvious route for GH to take.

Still, it’d be a mistake to ignore the possibility of Nelle being the victim. She’s caused plenty of trouble, so she’d deserve it. General Hospital spoilers say Maxie will be discouraged on May 23. She might be bummed about Nathan (Ryan Paevey) missing her baby’s first moments or she could be the one who fears her kid won’t make it. If it’s the latter, Peter (Wes Ramsey) could cause chaos.

Would Peter be willing to swap the babies and give Maxie the healthy one? Based on what Faison’s (Anders Hove) son has done so far, we’d say he’s capable of it. Peter would do just about anything to keep Maxie happy. He couldn’t bear to watch her lose her baby after she already endured Nathan’s death.